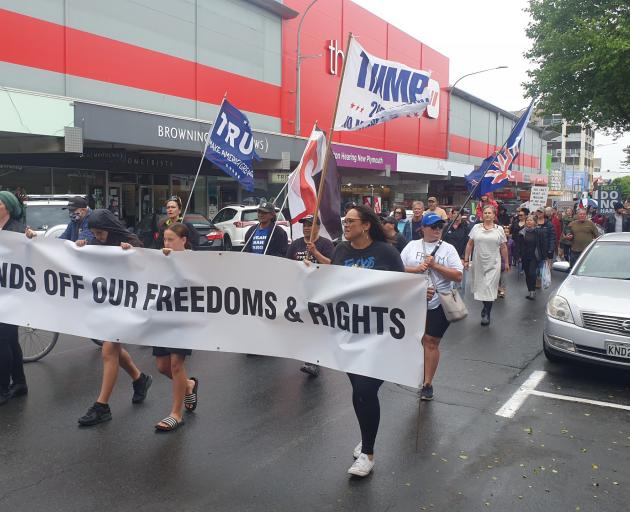 In addition to the Newmarket march in Auckland, about 200 protesters marched up New Plymouth's Devon Street on 4 December, calling on the government to end the vaccine mandate. Photo: RNZ / Robin Martin
Police asked Aucklanders to avoid Newmarket this afternoon as protesters against vaccine mandates marched through the area.

Hundreds gathered at 11am at the Auckland Domain before heading to Westfield Newmarket via Carlton Gore Road and Broadway.

They then moved towards Government House in Epsom.

"Our focus remains balancing the safety of all protesters and the public, with the right to peacefully protest."

Houliston said traffic in the area had been disrupted by the protesters.

"We would like to thank members of the public who have deferred their travel today.

"We also acknowledge those that have been inconvenienced.

"Police will follow-up any incidents of offending or concern identified during the protest activity."

The protest organisers are calling the rally 'the Mass Exodus'.

Meanwhile, anti-vaccination protesters have again taken to the streets of New Plymouth.

About 200 protesters gathered at Puke Ariki before marching up Devon Street, the city's main shopping area.

They chanted 'freedom' and carried placards calling on the government to end the vaccine mandate.

Many waved flags including campaign banners for former US president Donald Trump and the tino rangatiratanga or Māori flag, and the United Tribes of NZ flag.

Some of Auckland's strict lockdown rules were eased yesterday, as the country moved to the new traffic light Covid-19 protection framework.

In one case, a person is in a serious condition after being assaulted on Karangahape Road.

A 22-year-old man has been charged with wounding with intent to cause grievous bodily harm.

He is due to appear in the Auckland District Court today.