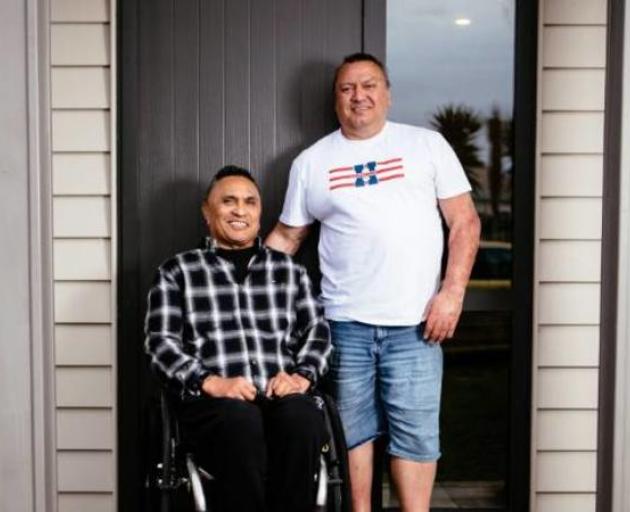 George and Damien Nepata. Photo: Stuff via RNZ
A former soldier left a tetraplegic due to a Defence Force failure has been given a formal apology and compensation 31 years after the incident.

George Nepata was left a tetraplegic after dropping off a stretcher he was being carried on during a training exercise in Singapore in 1989.

His brother, Damien, also received burns to 40% of his body in 1994 when the tank he was driving crashed, rolled and caught fire in Waiouru.

Campaigning by the brothers for compensation had been repeatedly denied over the years. The brothers had even taken their case to the Waitangi Tribunal.

Cabinet has now approved an apology and a confidential payment for George. Stuff reports that the minister did not put Damien's case before Cabinet to consider because it was a more complicated accident.

Damien only received a personal apology from the minister.

In a statement, Defence Minister Ron Mark said there was a moral obligation to address this and formally apologised to George Nepata on behalf of the government and Defence Force.

"This apology reflects the fact that as a junior soldier George was obliged to obey the commands of his superiors during the exercise and had no opportunity to challenge the conduct of the exercise," Mark said.

"The apology also acknowledges the efforts and costs associated with his petitions to Parliament, but most importantly it recognises the burden and struggles that George, his wife Kim and his wider whānau and family have borne since the accident.

"The injury he suffered was totally avoidable and unnecessary. I hope this apology from the government and New Zealand Defence Force, and the ex gratia payment, will help George to continue to make the best of the situation, as he has done for so long."

Mark said he acknowledged there had been a concern around setting a precedent when considering this case over the years, but he reiterated this issue was a moral one, not legal.

"If other cases arise then they will need to be considered on their own merits," he said.