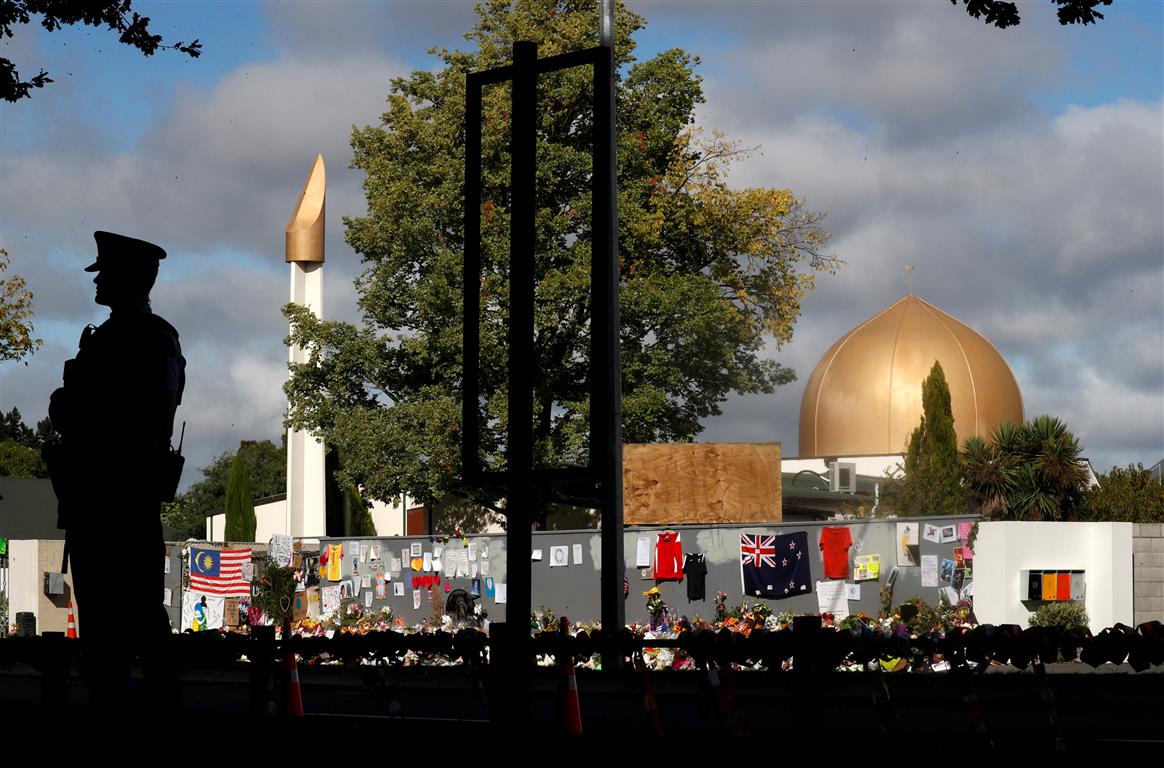 A police officer stands guard outside Al Noor mosque in Christchurch a week after the attacks in March. Photo: Reuters
Armed police will patrol parts of New Zealand in a trial project following heightened security concerns after the mass shooting in Christchurch in March that killed 51 people.

New Zealand, like the United Kingdom and Norway, is one of the few countries where police do not carry guns while on general duty. However, hand guns, rifles and tasers are kept in their vehicles and can be used with a supervisor's permission.

Serious crime is relatively unusual in New Zealand, although frontline police were armed for several weeks following the massacre by a suspected white supremacist at two mosques in Christchurch on March 15.

The attack sparked a debate on whether all police should carry fire arms.

"Following the events of March 15 in Christchurch, our operating environment has changed," Police Commissioner Mike Bush said in a statement on Friday.

"Police must ensure our people are equipped and enabled to perform their roles safely and to ensure our communities are, and feel, safe. This means having the right people with the right tools, skills and knowledge ready to respond at all times," he said.

The Armed Response Teams will be rolled out in Manukau county in Auckland, New Zealand's largest city, and Waikato and Canterbury on October 28 on a six-month trial.

They will be routinely armed, equipped, mobile and ready to support frontline police officers at incidents that require enhanced tactical capabilities, Bush said.

He said there was no immediate threat.

An Australian national has been charged over the attack in Christchurch, New Zealand's worst peace-time shooting. The man has pleaded not guilty to 92 charges against him and faces trial in May.

Threat levels have been heightened around the country since the Christchurch attack and 1,400 firearms have been seized from offenders since March.

Police Minister Stuart Nash said the move did not mean that police would be armed routinely.

"The three areas have been selected for the trial because of the incidence of crimes involving armed offenders," Nash said.

New Zealanders must have a gun licence to own a firearm. There are an estimated 1.5 million guns in the country.

The government banned military-style semi-automatic and other high-calibre guns within weeks of the Christchurch shooting and also introduced a gun amnesty scheme. More than 29,000 firearms have been collected so far, according to statistics provided on the police website.