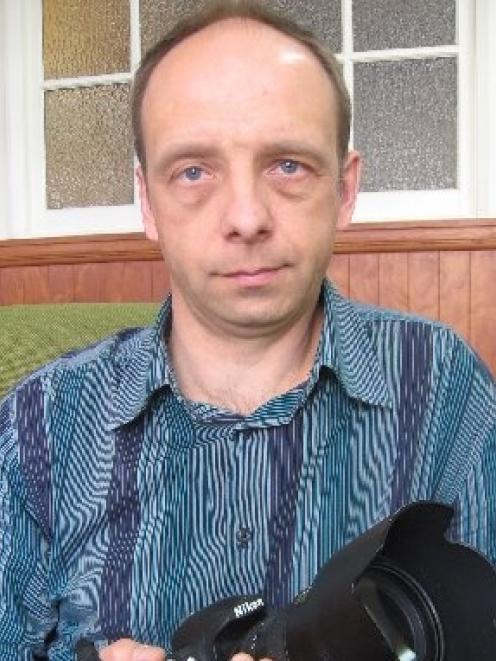 Greenpeace photographer Dmitry Sharomov pictured in Dunedin in 2007. Photo by Bruce Munro.
New Zealand environment activist Jonathan Beauchamp is in good spirits despite being denied bail by a Russian court.

A handcuffed Mr Beauchamp managed a smile while in court in Murmansk on Wednesday, Russian photographer and former Dunedin resident Dmitry Sharomov said.

Mr Beauchamp is among 30 people facing piracy charges over a Greenpeace protest against oil drilling in the Arctic.

The other New Zealander arrested, David Haussmann, was refused bail on Monday. Mr Sharomov is in the northwest Russian port city of Murmansk photographing the pre-trial hearings for Greenpeace.

''I saw David on Monday and Jonathan on Wednesday ... They looked OK; they were even smiling. But I can say they looked tired as well,'' Mr Sharomov said.

The BBC reported Mr Beauchamp's lawyer argued his client should be bailed because he had a heart condition but the judge was not swayed.

Most of the activists who were aboard Greenpeace vessel Arctic Sunrise were being kept in separate cells in a Murmansk detention centre awaiting a trial in late November, Mr Sharomov said.

The guards, who are polite but do not speak English, let them out of their cells for one hour each day.

The detainees have three meals a day. Drinking water has to be boiled. They are able to wash their clothes by hand.

''I feel very sad and sorry for all of them. For some people it is more difficult than for others to remain under custody.

''It is hard to believe what is happening with them. The charges are absurd. We want them out as soon as possible.''

Auckland-born Mr Beauchamp, who has been based in South Australia since 2007, has crewed Greenpeace vessels several times. On this trip he was looking after small boats on Arctic Sunrise.

David Haussmann, of Reefton, has been involved in many Greenpeace campaigns during the past 13 years. This was his fourth trip to the Arctic.

Mr Sharomov has sailed on Greenpeace campaigns for the past nine years. Most of his expeditions were aboard Rainbow Warrior.

He lived in Dunedin with his family six years ago while studying photography in the city.

The 28 crew of Arctic Sunrise, plus two freelance journalists, were arrested by Russian security forces on September 18 in international waters.

The piracy charges, punishable by up to 15 years' jail, appear aimed at sending a message that Moscow will not tolerate attempts to disrupt its development of the resource-rich Arctic, which Greenpeace says could destroy a pristine environment.

Russian authorities said they might lay further charges against the crew after reportedly finding morphine and poppy straw, an opiate, aboard Arctic Sunrise.

Greenpeace said the accusation was a smear.