Attacked after asking for music to be turned down 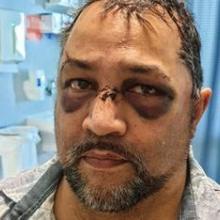 Albert Maynard was allegedly attacked by a group after he asked them to turn their music down. Photo: Supplied via NZ Herald
As the blows kept coming - to his head, face and body - a father-of-five continued to stand and defend himself as his wife screamed at his attackers to stop.

Albert Maynard suffered serious injuries to his head and face when a group allegedly attacked him - one armed with a wooden stake - about 1am on Saturday, in Flat Bush, South Auckland.

His wife, Monika Maynard, would effectively save his life when - seeing the attack from upstairs - ran outside to yell at the group while on the phone to police.

"As soon as he approached the car, they immediately - in seconds - got out of the car and started attacking him,'' she said.

Her 54-year-old husband had gone out to investigate where loud music was coming from on their street.

"He initially thought they were neighbours having a little party,'' she said.

"But then when he realised that it wasn't the neighbours - it was actually coming from a car - he went across to talk to them.''

She told the Herald her husband walked across the road to where the vehicle was parked and asked one of the men inside to turn the music down.

It was then all four males got out of the vehicle and began to punch and kick Maynard, while one in the group used a wooden stake to strike him.

"The attack [went] on for quite a few minutes.

"I screamed for them to stop. But they wouldn't listen''.

Monika Maynard said she believed the men decided to leave when they heard her on the phone to police - and for the fact that their victim would not fall.

"I think that's another reason they left. Albert - he just wouldn't go down.

"He was bleeding pretty profusely. It wasn't good. If the cops hadn't been called, I don't know what else might have happened,'' she said.

It would take about three hours for medical staff to stop the bleeding from his head.

His blood-soaked hair has several staples in it and bits of what were once fresh white gauze, now a deep red, stick out of it.

Monika said it was somewhat lucky that her husband - "a big Samoan guy'' - had been the one attacked and not one of their elderly neighbours.

"It was just one of those things you don't want to go through again.''

An 18-year-old male has been arrested and charged with wounding with intent to cause grievous bodily harm.

The attacker appeared in the Manukau District Court today.

Police say inquiries are continuing and they cannot rule out further charges being laid.

Nab them. The 'dont tell us what to do' mob, unaccustomed as they are to Community.