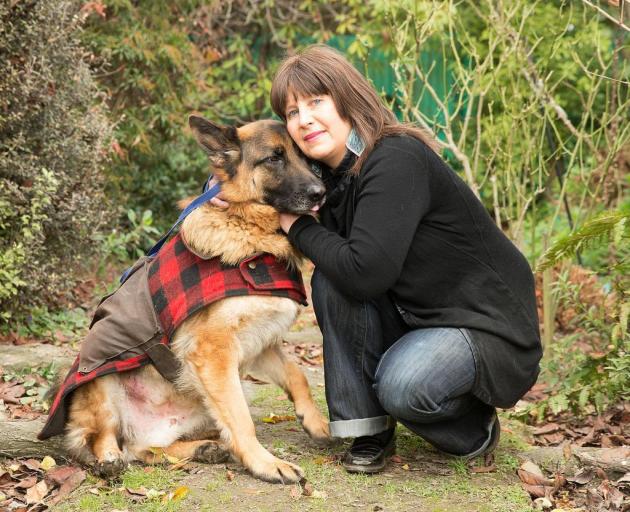 Nichola Crawford has been left overwhelmed by the support she has received after her dog Jerry was attacked by three dogs on Wharenui Rd. Photo: Star.Kiwi

Nichola Crawford cannot fathom the kindness that has been shown to her following the brutal attack of her German shepherd Jerry.

The Riccarton resident was walking her son’s dog Jerry along Wharenui Rd recently when three unrestrained dogs appeared from an unfenced property and attacked him.

“I was a mess, I don’t remember most of it . . . I was trying to hold Jerry but he was on his choker chain, so I was trying to sort of swing him around but it was all just so quick . . . he was bleeding everywhere,” Ms Crawford said.

The owner of the three dogs along with members of the public helped throughout the attack, but Ms Crawford has not heard from the owner since.

The attack left Jerry with puncture wounds along his abdomen, numerous bites and a wound on his neck.

He was taken to the vet where he was sedated so his wounds could be drained, cleaned and stitched up – he was also prescribed antibiotics and painkillers.

Ms Crawford said she doesn’t blame the dogs or their owner – but she would like a fence installed on their property and has asked the city council’s dog control team to follow up.

“I said to dog control I don’t want to take money off them because it wouldn’t be right. I have already got the money raised,” she said.

Within four days after setting up a Givealittle page to raise money to cover Jerry’s vet bill, $1027 was donated by 61 people.

Mrs Crawford said most of the money came on the day she set up the page and she was overwhelmed by everyone’s support.

The vet bill was $950, but Ms Crawford also had additional costs to cover having Jerry’s stitches cleaned.

Axel Jones, who made a donation, said he didn’t know Ms Crawford but it was such an unfortunate story.

“As a dog owner you feel that’s like a friend being attacked and no doubt a very scary experience with a big bill to go with it.”

Since the attack, Ms Crawford, who already has anxiety, said she has been having panic attacks.

“That was my worst thought ever happening and now it has happened,” she said.

Ms Crawford said she has been left afraid to take Jerry out but she is hoping with “baby steps” she will be able to take him walking regularly again soon.