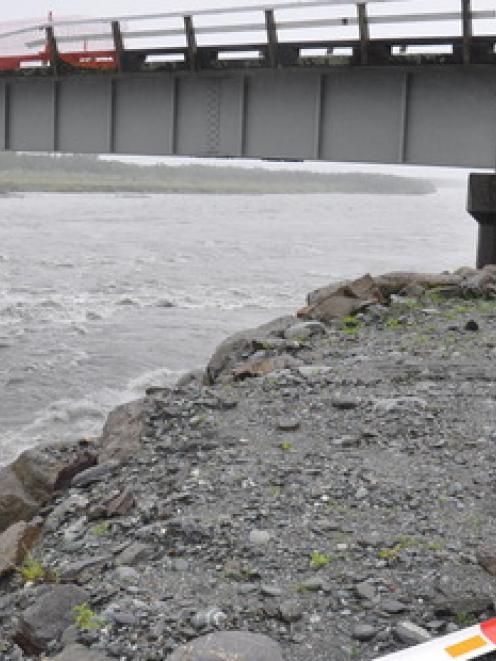 West Coast police search and rescue co-ordinator sergeant Sean Judd and police dive team supervisor Geoff Bray look over the crash site. Photo / Greymouth Star
A car that crashed off a bridge in South Westland two days ago has been recovered this morning, with two bodies inside.

Recovery of the submerged car had been hampered by heavy rain that swelled the Wanganui River near Hari Hari.

But clear weather this morning allowed police to use a crane at about 10am to haul out the 2014 red Toyota Corolla.

It was found about 50m downstream from the bridge.

Police confirmed that two bodies were found inside.

"Police are confident of the identities of the deceased but no information in relation to the pair will be released until formal identification has been completed and next of kin informed," a police statement said.

The car has been taken away to be examined and the serious crash investigation is continuing.

The crash happened at about 4.30pm on Tuesday.

Eyewitnesses later told police of concerns over the motorist's driving.

Eco Rafting Adventures owner operator Josh James Marcotte was one of the first on the scene.

He criticised police for not letting him enter the water and try and free them from the car despite being a certified swift water rescue technician.

But police said that since Mr Marcotte arrived "thirty minutes" after the crash, there were unlikely to be airpockets in the submerged vehicle, as windows were most likely smashed when it went through the barrier and into the river.