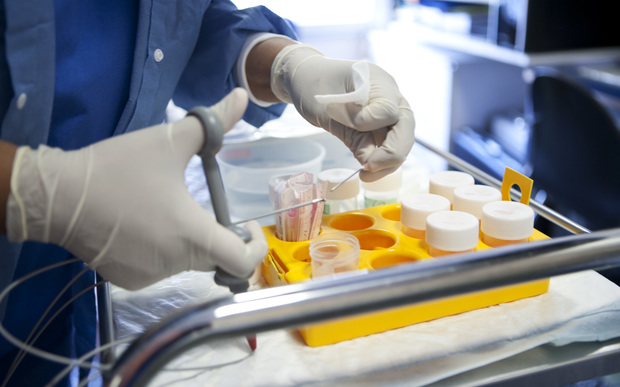 A collaboration between Callaghan Innovation, the University of Otago, a British university and a tech company in Christchurch will start trials across New Zealand.

Callaghan Innovation principal research scientist Joseph Deer said the non-invasive technique could be eventually integrated at a GP level which would alleviate the stretched resources in colonoscopy bowel screening.

"Basically somebody just breathes into this mask and these tubes or bags collect the breath, and that gets sent to a centralised lab and it gets analysed. And there are particular compounds we call them biomarkers which are present - they've discovered a whole panel of things that are present in people who have cancer."

Deer said the biomarkers could identify cancer more accurately than current bowel screening tests and home kits which test the amount of blood in the faeces.

"In this test, you detected it [blood] in faeces. So if you have a high amount of haemoglobin in your faeces, it's an indication that your bowels are being perforated and therefore you've got a tumour or something's not right."

However, it's not a direct indicator that someone has bowel cancer, as there are other ways blood can get into the faeces, he said.

Deer said commonly, bowel cancer was picked up in the later stages, but the biomarkers would identify it earlier.

Using this technology would reduce the number of people needing invasive colonoscopies, and decrease the load on already stretched resources, he said.

The study comes as a national bowel cancer screening programme is being rolled out across New Zealand, with at least 180,000 people over the age of 60 screened since it started in mid-2017, with 400 cancers discovered and hundreds of potentially cancerous polyps removed in that time.

The programme combined with greater public awareness has however led to a 45 percent increase in diagnostic colonoscopies in five years, with former president of the Gastroenterology Society Michael Schultz saying about 50 more specialists would be needed.

It could give people who had already battled the disease and still required regular screening some hope of earlier detection, without suffering through colonoscopies or painful procedures.

Deer said it had already been trialled in the UK, where thousands of people had been tested over two years.

The key technology used in the breathalyser is designed and made in Christchurch. It also has the capabilities of identifying other cancers.

Deer said this technology could prove useful for regions like Southland and South Otago where there were limited resources and facilities for bowel screening.

The project is already in discussions with Capital and Coast, and Canterbury District Health Boards, to see where it could fit at a clinical level.