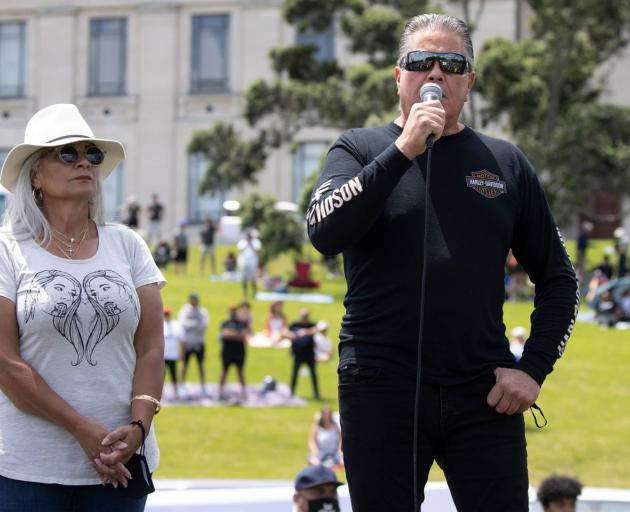 Brian Tamaki and his wife Hannah speak at the Auckland Domain protest on November 20, 2021. Photo: NZ Herald
Destiny Church leader Brian Tamaki has won his appeal against being remanded in custody.

It is expected he will be released from prison soon.

In it, supporters, who are gathered outside Auckland's Mt Eden Corrections Facility, said church leader Brian Tamaki would be released from the facility "very shortly".

The song Celebration played as people lined the street.

People gathered outside the facility supporting Tamaki's release were urged to stick to their bubbles.

Stuff reported Justice Paul Davison ordered Judge Thomas' decision to have Tamki remanded in prison be quashed, and granted Tamaki to be released from custody on a 24-hour curfew.

Justice Davison earlier today had reserved his decision, saying he intended to release it this afternoon.

Supporters gathered outside central Auckland's Mt Eden Corrections Facility this morning as the hearing got under way.

Hundreds of devotees converged in a "welcome party" for the controversial church leader they hope will be let out of prison today after his 10-day stint behind bars.

Tents have been set up and people are lining the roads surrounding the prison.

A host of the welcome party live-streamed on the Man Up Facebook page this morning encouraged more people to join them and described it as "Freedom Day for the mighty man".

Between 200 and 300 supporters have been gathering outside the prison since Tamaki was imprisoned last Monday.

Judge Evangelos Thomas had remanded the high-profile church leader in custody until his next court appearance tomorrow, a decision Tamaki immediately appealed.

Through his lawyers, Tamaki, who is facing five charges relating to allegedly breaching Covid-19 lockdown restrictions by attending Auckland Domain lockdown protests and for breaching bail, said last Monday he'd "defend what is alleged when permitted".

Tamaki has already pleaded not guilty to all charges.

The breach of bail hearing is expected to take place tomorrow at Auckland District Court, but Mansfield told the Herald he's still awaiting final confirmation in case the hearing is affected by the country's move to the Covid-19 red light setting on Sunday night.