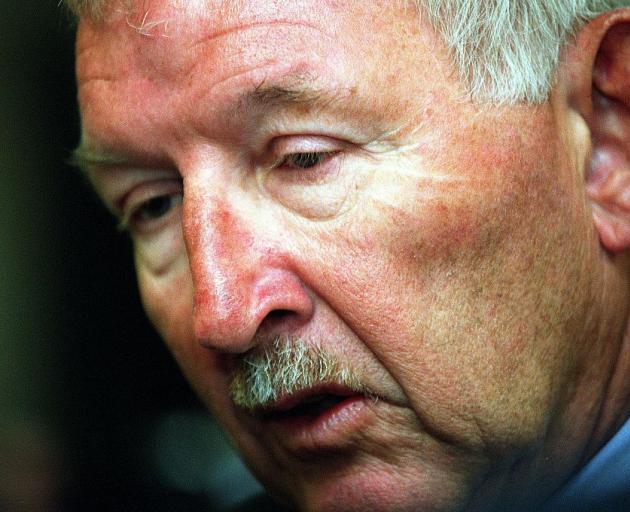 Disgraced retired businessman Ron Brierley has been sentenced to 14 months' jail with a seven-month non-parole period for possessing images of child sex abuse.

The 84-year-old appeared today at Sydney's District Court, after pleading guilty to three charges of possessing child abuse material in April this year.

The sentence was handed down by Judge Sarah Huggett.

Judge Huggett rejected the defence's claims that Brierley did not realise that the images he had were illegal.

Brierley confessed a lifelong attraction to pre-pubescent girls and said he masturbated to the images.

He tried to access the Dark Web but was unable to.

Following his arrest and subsequent treatment, Brierley said he had overcome his sexual interest in prepubescent girls.

"I am repulsed by the whole thing. I would not want to go there again," he said according to a record read out by Judge Huggett.

She added that his risk of re-offending was low given the sentence imposed.

Some of the girls in the images were as young as four years old.

Formerly one of New Zealand's most successful businessmen, Brierly was arrested at Sydney airport in December 2019 when thousands of illegal images of young girls were found on his laptop and USB drives.

Stories in Word documents he had been sent detailing the rape of girls were also found.

The discovery followed an anonymous tip-off from a member of the public.

Brierley told police at the time "I reckon they're all, they are perfectly okay" according to a statement of facts. He denied they were for a sexual purpose, saying they "looked interesting".

Police searched his home later that day and found more electronic devices. Together with those seized at the airport, there were more than 46,000 images classified as child abuse material.

Many of these were duplicates but the police were not able to find out how many. Police found tens of thousands of other images that were not illegal but were "of interest" to the investigation.

Only one image in Brierley's possession fell within Interpol's most serious category for child sex abuse images, depicting a naked girl aged between nine and 11 years old.

Lawyers for Brierley previously argued that their client was suffering from dementia and severe coronary artery disease and any jail sentence could compromise his wellbeing.

The charges carried a maximum penalty of 10 years in prison.

Brierley, the founder of Brierley Investments, was a clinical corporate raider and one of the best-known New Zealanders of the 1980s and 1990s.

He was knighted in 1988 but gave this up in May after Prime Minister Jacinda Ardern started moves to strip him of the knighthood following his guilty plea.

Brierley became both feared and revered in business circles for his shrewd ability to spot companies with untapped value, which he would then take over and turn around for vast profits.

The NBR 2019 Rich List estimated Brierley's net worth at about $220 million.