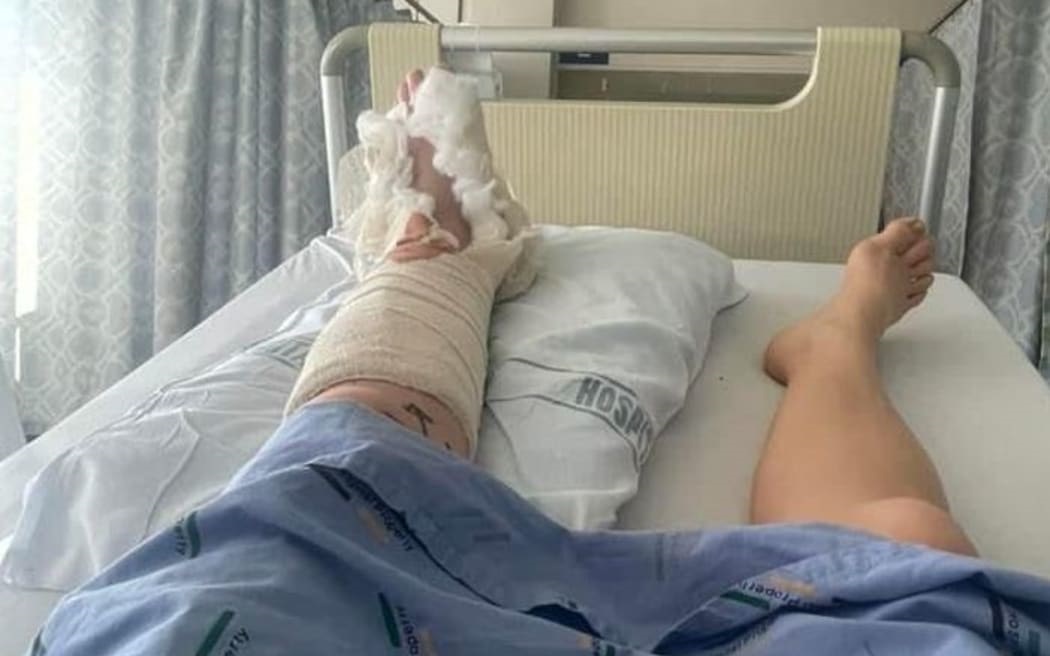 Georgina Lloyd says she was left in the dark for days over much-needed surgery to fix her broken leg. Photo: Supplied / Georgina Lloyd
A woman whisked to Waikato Hospital for urgent surgery on a broken leg has endured an 11-day wait in the wrong ward.

A fall from a horse on June 17 left Georgina Lloyd largely immobilised with her foot skewed to one side.  She needs screws and plates for her snapped tibia and fibula to heal.

However, she said she endured a seven-hour wait "pretty much immobilised" in the Waikato ED after an ambulance transferred her from Thames Hospital.

That was followed by a much longer wait in a bed in the Ear, Nose and Throat ward - without any fresh gowns or bedsheets - until hospital staff apologised last night.

Lloyd has begun each morning as a nil by mouth, meaning no food or drink from 2am until 10am.

And every day at 10am, she learnt that her surgery would not go ahead that day.

"You sit there for hours each morning going, is a doctor even going to come? There's no real routine, there's no being told what's happening," she said.

As time passed, Lloyd said her bones had begun to callus, adding to the length and complexity of the surgery.

"It's a bit concerning. I'm getting worried it's not going to repair properly. Nobody's talked to me about any of this... what the processes are, what's expected."

"I've seen people come and go in my ward. I've seen someone else with a similar injury come in on Saturday and they were talking about doing her today. I just don't understand. I'm really starting to think maybe you've got to be loud and obnoxious to get anything done." 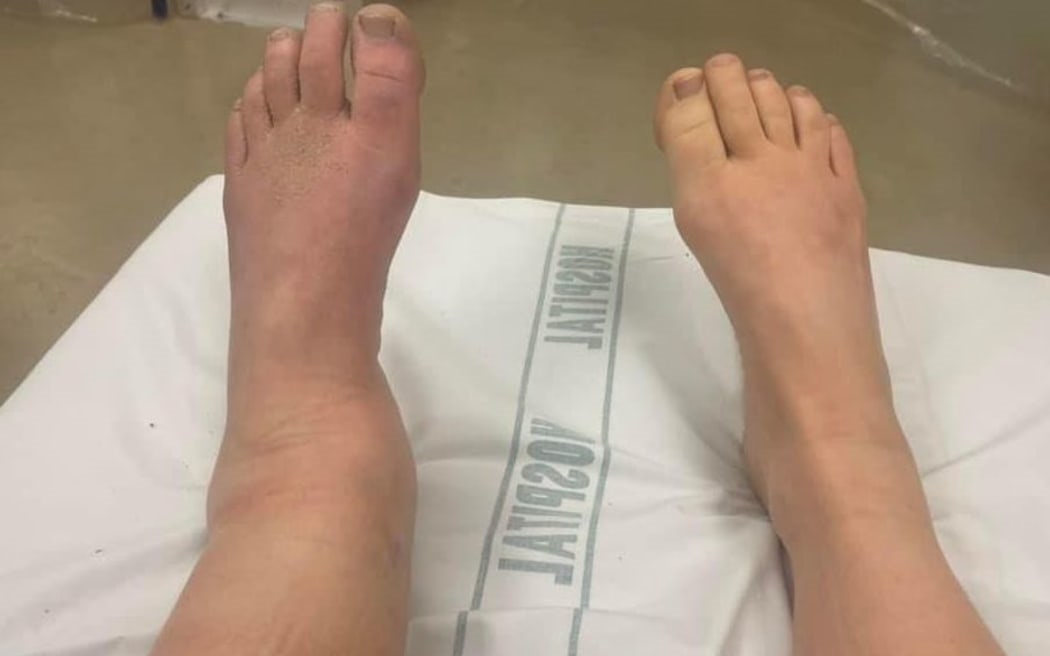 Lloyd's attempts to get moved into the private health system had been unsuccessful because ACC needed paperwork she could not get hold of.

Meanwhile, a "practically inhumane" lack of hygiene had added to her almost two-week discomfort, she said.

In the ear, nose and throat ward, she said her bedsheets and gown were not changed and she spotted faeces smeared across the bathroom wall which did not get removed.

"It was still there some days later, so I cleaned it off myself. And other things - nobody gets bathed. There's people who can't really get out of bed, who aren't getting washed. And they smell to the degree that it's nauseating," she said.

"Visitors have come and they've had to stick their head out the window because it's nauseating."

Things have not gone to plan - DHB

After RNZ contacted Waikato District Health Board on Monday night, Lloyd was moved into the orthopaedic ward, given a fresh hospital gown and bedsheets and told she was third on the surgery waitlist.

The health board told RNZ staff had met with Lloyd to discuss her concerns and to extend their sincere apologies.

In a statement, it explained it had been scheduling extra acute theatres to cope with high demand.

But in Lloyd's case, it conceded things had not gone to plan.

"We agree that in this case there was a lack of clear communication with this patient with regard to their treatment plan and this has contributed to confusion and concern."

It said the condition of the ward, as described by Lloyd, was also not up to standard.

"What you have described is not an acceptable level of cleanliness and we will undertake an audit of the relevant area to ensure it is being cleaned to an appropriate standard."

Yet health advocates said Lloyd's case was just another symptom of a health system in crisis.

Association of Salaried Medical Specialists executive director Sarah Dalton said her organisation was increasingly concerned about the time people were having to wait for acute and urgent surgeries.

"We're also really concerned about, when hospital beds are available, they're often not in the appropriate ward. This is not the first instance I've heard of, or the first hospital I've heard of, that has had to put the patient in a non-surgical ward or a non-orthopedic ward," she said.

Orthopaedic Association president John McKee explained the urgent and acute treatments were usually only part of a surgeon's full workload.

"You can rest assured if there are problems and pressures and delays getting the acute patients done, it will be an even worse situation with respect to the planned and elective operations that would normally be done."