Call for ban on 'bad boys' of the beach 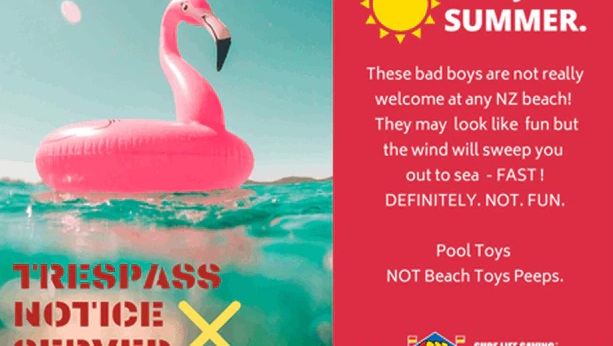 Surf Life Saving says inflatable toys are for the pool, not beach.
Surf Life Saving New Zealand wants to ban what it is calling "bad boys" of the beach, and it's not dogs, drones, vehicles, or any of the usual suspects.

In a tongue-in-cheek message with "a serious element to it", National Community education manager Dr Mick Kearney says the toys are not welcome at any New Zealand beach.

"They may look like fun, but when you're on them the wind can easily blow you out to sea," he warns.

The charity is asking consumers to think twice about buying inflatable toys as Christmas presents for other people, and to consider where that person would use them.

"They are not ideal for the beach. If someone is on one and gets blown offshore, they could end up in trouble – it's that simple," Kearney says.

"It only takes a little bit of breeze."

He says users of any vessel, from a kayak to a boat, should wear a lifejacket and carry two forms of waterproof communication, such as a cellphone in a plastic bag, flares or a VHF radio.

If people do get into trouble while on an inflatable toy and need help, Kearney says they should stay with their toy and raise their hand for help.

"A lot of people panic, throw their inflatable toy and try and swim back to shore, and often end up struggling to get back.

"But we don't want it on the beach to start with."