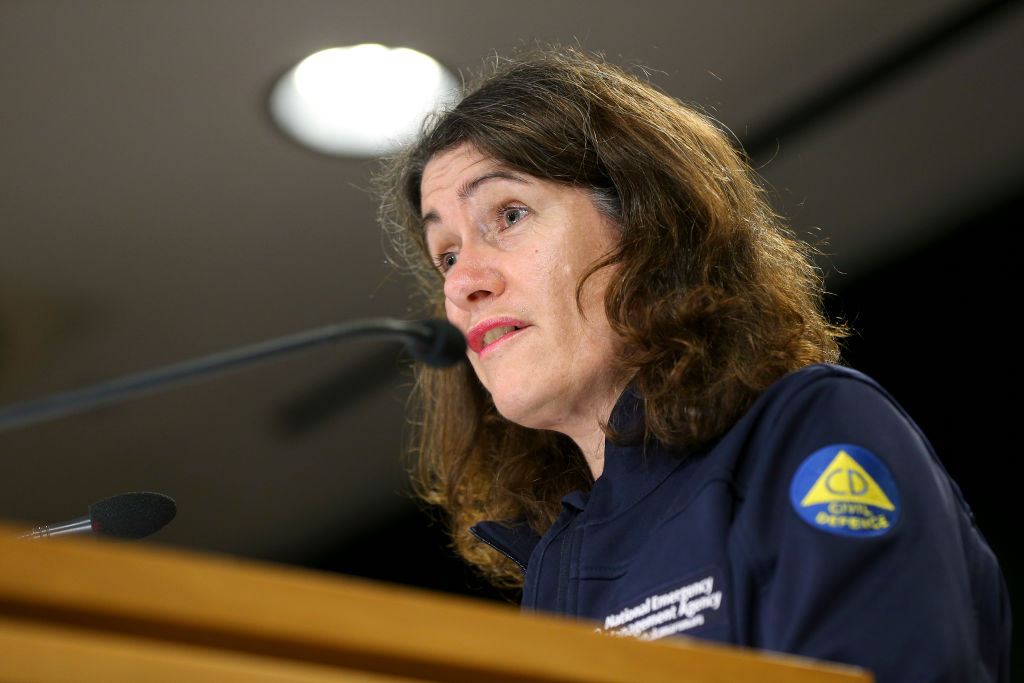 Director of Civil Defence Emergency Management Sarah Stuart-Black. Photo: Getty
Reports of online anti-Chinese sentiment relating to the Covid-19 pandemic are worrying top Government officials, who are pleading with New Zealanders to "be kind to each other".

The threats to people in the Chinese community have become so bad that some of those being abused are talking about arming themselves to form vigilante groups.

Police said they would talk to the people who had made those comments. One group member told the New Zealand Herald there had been an increase in online attacks against the Chinese community in recent days, and the groups were a way of "protecting ourselves".

The United States has become the centre of the global pandemic, with more than 100,000 confirmed infections and nearly 1600 deaths.

President Donald Trump said he was considering a quarantine on New York, parts of New Jersey and Connecticut. He said had spoken with New York Governor Andrew Cuomo this morning and might make a decision later today.

Meanwhile, Spain has suffered another staggering surge in coronavirus deaths overnight as it struggles to fight back against the disease.

Another 832 new fatalities were recorded in Spain on Saturday – its highest single-day jump since the beginning of the pandemic – raising its death toll to just under 5700. Its number of cases also rose to around 72,000 on Saturday.

"We need to look out for each other – now more than ever, to unite against Covid-19."

Her comments followed reports of online abuse towards people with confirmed, or probable, Covid-19.

"It's not acceptable to be attacking people who have been caught up in the pandemic."

This comes as New Zealand enters day four of the lockdown.

The Government's lockdown taskforce yesterday confirmed 451 people in New Zealand have, or are likely to have, Covid-19.

Of those infected, 12 are in hospital and two are in intensive care in a "critical" state.

Although it is known that one of the cases is in Nelson Hospital, Stuart-Black was unable to provide details for privacy reasons.

But she did confirm that 50 people have recovered from the virus.

Among the new Covid-19 cases is British Prime Minister Boris Johnson – he took to social media yesterday to tell the public he had "mild symptoms" and was now in self-isolation.

He urged people to comply with safety and isolation measures to make sure the UK "comes through this epidemic".

That is a similar message that New Zealand Government officials and ministers have been hammering home for days.

The message from the Covid-19 response team was clear yesterday: "Stay local and stick to your bubble".

If people break the rules, Stuart-Black said it's more likely the lockdown period would increase.

When asked if she thought the lockdown period would be extended, Prime Minister Jacinda Ardern told the Nation she "believes in New Zealanders".

"I have faith in us as a nation to do this."

Among those are eight Air New Zealand long-haul fleet employees, the airline confirmed.

The infected staff worked on Los Angeles and London flights.

An Air NZ spokeswoman said one staff member had recovered.

Stuart-Black and Ardern have warned the number will continue to climb for at least another nine days.

"Don't be disheartened when you continue to see our numbers increase," Ardern said.

"I expect that we will have a number of cases and those cases will grow steeply because of the lag period of Covid-19."

Until then, New Zealand's compliance level needs to be high, she said.

"We just can't tolerate anyone flouting the rules."