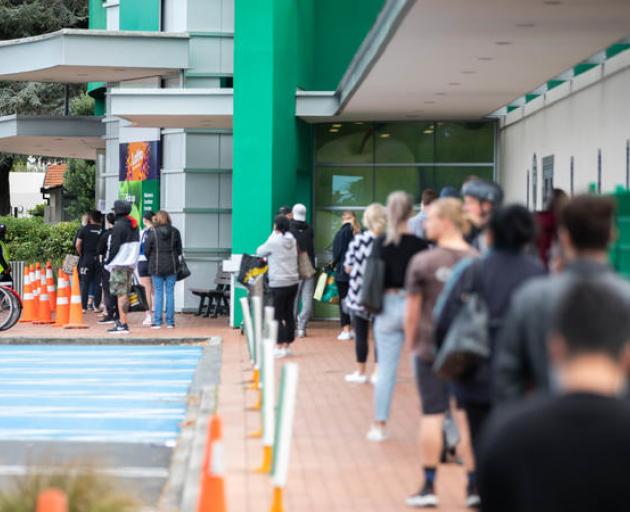 People queuing to get into a Countdown supermarket during the Covid-19 lockdown. Photo: RNZ
A Northland MP is backing home healthcare workers who want to be allowed priority entry into supermarkets.

Countdown and Foodstuffs say they only gave priority to medical professionals, DHB and emergency services personnel with ID.

Whangārei MP Shane Reti, a former GP, took up their case this week and said the supermarket chains told him a change in some guidelines might be coming, but it was not clear what.

Health support worker Roz Yates said two separate supermarkets had told her to bring her bedridden 97-year-old client with her if she wanted to get priority.

"Basically, that's what they're telling me, to wait in line which would mean that I wouldn't be back to the client in time to give her care," Yates said.

Yates, wearing her Geneva Healthcare uniform with her name badge, went to the New World supermarket on Wednesday.

"The security guy said that the only way to get priority was to bring the client with me. And for them to be over 70.

"I then said to him, my client is 97 years old and bed-ridden ... and he told me that was the rules and I had to join the line."

She walked across to competitor Countdown, and a similar exchange unfolded.

"I was told that priority shopping is between 8 and 9 in the morning, and I said 'well, we have a set time to shop for a person', they still wouldn't do it."

"What frustrates me more about it, is that they said that they would allow someone in wearing a DHB badge.

"So if you've got a healthcare worker at the hospital who does the same job as me, but because they work in the hospital, they would get priority."

Home healthcare workers often work for agencies under contract to DHBs. Yates shops for one client a week; some shop for several.

Yates went to a third supermarket, a nearby Pak'nSave.

"He said 'who are you shopping for', I said 'I'm shopping for a client'. When he let the next lot of people in, he let me in too."

She guessed she might have spent at least an hour in a queue otherwise. "Probably the whole hour and a half I had to do the shopping, I'd be waiting in line."

She needed to get back to give her client dinner.

Dr Reti told RNZ he had been approached by a number of other home support workers.

"They stand in line for the hour, hour and a half it takes before they even get into the supermarket, and they may be servicing many households.

"They made the point to me that that means they can't look after the people they're tasked to look after, can't do a good job."

Dr Reti raised it with local supermarket managers who told him the workers were not eligible and this was national policy.

He took it to the chain of national managers on Monday, and said on Thursday he had of "general relaxation" of the policies, not specifically about home support workers, but for the whole community.

Neither supermarket chain commented on any such relaxation.

Dr Reti questioned how home support workers were not health workers - "they wipe your bottom, they make your food, how is that different from a worker in a hospital on one level?"

"Never once have I seen anyone in the queue - and I've stood in queues with probably about 125 people - has anyone ever said 'oh, that's not fair'.

"I think communities would be more than happy for a community social support workers to be brought forward to the front of the queue."

The supermarket chains said they were doing the best they could, and trying to help vulnerable shoppers.

"I can tell you we don't even prioritise our own front-line essential team members - they, too, must stand in line and facilitate priority access to emergency services personnel and medical professionals," Foodstuffs corporate affairs manager Joanna Braeckel said.

Countdown said a lot of customers had applied on behalf of older family members to get a priority assistance service, "so this could be something that families could consider to help out".

Typical supermarkets, they have been handed a duopoly on a silver platter making immense profits from a captive populace and they are saying that they are 'just following the rules'. I hope people remember this when the lock down is over and vote with their feet.