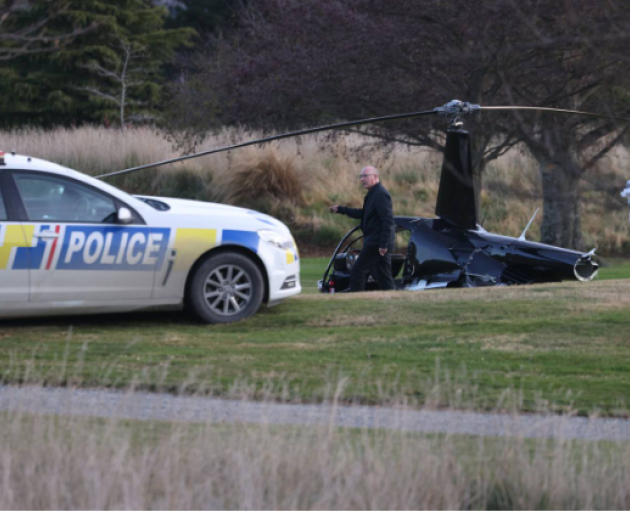 The tail of the Robinson 44 helicopter was sheared off in a crash which injured all four on board, including a couple about to be married. Photo: George Heard/NZ Herald
The survivors of last weekend's horror helicopter crash during a Christchurch couple's wedding remain in hospital but are making progress.

The couple was badly injured, along with the pilot and wedding photographer Rachel Jordan.

A spokesman for the pilot, employed by Wyndon Aviation, said she was improving.

"The pilot is in reasonable spirits, considering what she has been through," he said.

He expected to provide a further update on her recovery tomorrow.

She sustained significant injuries to the hand, wrist, leg and back, including broken bones and lacerations in the crash.

Jordan was moved from the Intensive Care Unit to the orthopaedic trauma ward late last week.

She is able to have some visitors but spends much of her time sleeping and trying to manage her pain, which at times is excruciating.

Her husband Eric said Jordan had had "a somewhat difficult past couple of days".

"And (she is ) is often in an out of sleep due to the pain medications," he said.

"Sometimes she's in so much visible pain it's difficult to have a conversation."

Jordan, who moved to New Zealand in 2015 and is based in Northland, is facing a long recovery.

Her husband said last week she could be in hospital for up to three months.

She has had several extensive surgeries to insert plates and rods into her broken bones.

Zougub and El Hanafy were being supported by members of their Al Noor Mosque community in Christchurch.

Both have undergone significant surgery and remain in hospital.

A Givealittle page was set up to help fund a second wedding once they are recovered.

A further $26,000 has been donated to a similar page set up to help support Rachel Jordan's family.

Wyndon Aviation last week confirmed the crash was the result of the engine losing power.

They are still working to establish how that happened.

The Civil Aviation Authority is also investigating and had reached out to the manufacturer.

They had also requested photos Jordan took seconds before the aircraft plummeted to the ground, hoping these may shed light on the situation.