Carjacking of grandmother caught on camera 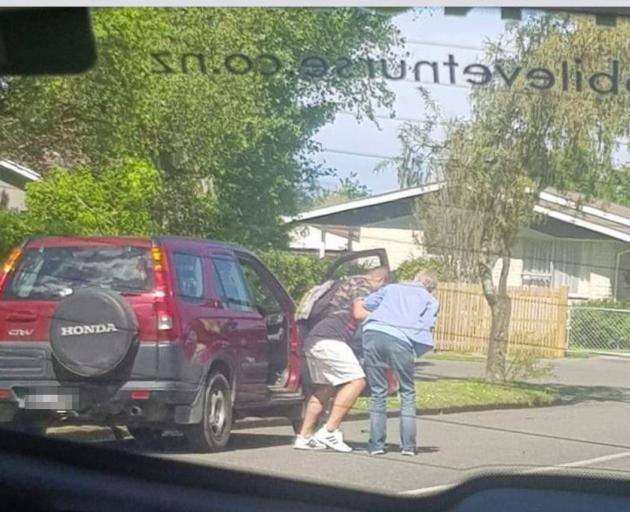 It was the second alleged carjacking in about an hour by two men. Photo: Supplied

A dramatic photo shows the moment a woman in her 70s was allegedly carjacked in a suburban Christchurch street on Monday afternoon.

The woman was pulled from her SUV in Reynolds Ave, Bishopdale, after delivering flyers as part of her work in the community.

The photo was taken by a passing motorist.

Her grandson Jordan Kidd, 22, told starnews.co.nz his nana was shaken after being pulled from her car, which was then stolen.

“She told me she got into her car and heard yelling at the door, telling her to ‘get the f**k out of the car’ and then next thing she knows the door’s open and they are taking her out of it,” he said.

It was the second alleged carjacking in about an hour by two men, the first one taking place at the intersection of Langdons Rd and Morrison Ave, Northcote.

The offenders then crashed the vehicle on Reynolds Ave and went searching for another, when they came across Mr Kidd’s nana.

One alleged offender, Jared Robert Fuller, a 26-year-old labourer from Kaiapoi, handed himself in to police on Tuesday night.

His alleged co-offender, who Detective Sergeant Brad Grainger said may face more charges relating to another series of offending, was still on the run on Wednesday afternoon.

Mr Kidd was heading home from work on Monday when his ex-girlfriend rang him after seeing photos of the incident online and recognising the vehicle.

“I couldn’t believe it, I was so bloody mad at these guys. I saw the photos of them, they aren’t small people, and they are fully grown men picking on the weak," he said.

“I did a quick U-turn to head out to where it happened but I couldn’t find nana anywhere.

"She gave me a call later that night to say she had been at the police station and to say she was okay, just a bit shaken up.

“She hasn’t left her bed since really, she was ill already."

His nana’s car, which she relies on to look after her nephew with Down’s syndrome, was found abandoned near the Waimakariri Gorge bridge.

Fuller has been charged with two charges of aggravated robbery of vehicles, unlawfully getting into a vehicle and another of driving while disqualified.

He appeared in the district court on Wednesday and was bailed on strict conditions.

Detective Sergeant Grainger said inquiries are continuing to locate his co-offender and further charges will be laid.

So far five victims have come forward and made complaints about incidents on Monday, which police believe may be related to the two men.