Dave Dunlay has co-hosted The Breeze breakfast show in Christchurch since 2017. Photo: Twitter
A Christchurch radio host has revealed he was let go by his employers after travelling during lockdown to deliver medicine to his elderly dog.

Dave Dunlay, a breakfast host on The Breeze, took to Facebook to share his story two weeks after he lost his job, saying he wanted to stop rumour and speculation around the details of his departure.

His employer, Mediaworks, say his travel during lockdown was wrong and said the broadcaster was "incredibly disappointed" by his decision.

"It's a strange feeling when you wake up one morning and don't have a job to go to," Dunlay wrote.

"I'm not alone, as a lot of people are experiencing this right now. You feel embarrassed and frustrated, there's feelings of shock, no control over circumstances and a perceived loss of respect as we see ourselves through the work we do."

Dunlay said that it was time to "move forward" and wanted to explain what happened for his own mental health.

Dunlay said the only public statement from his employers came early last week when a brief statement announced that "Dave is no longer with The Breeze."

He had co-hosted the Breakfast show in Christchurch with Hilary Muir since 2017.

Dunlay revealed that his contract was terminated for breaching level four lockdown rules after he drove to Banks Peninsula the weekend before Easter to deliver medicine to his elderly dog, who was staying with his wife and daughter.

"'The Wednesday before Easter, I drove to our lifestyle property at French Farm where my wife and daughter were spending lockdown. My daughter has just returned from overseas and initially spent time alone in order to self-isolate," Dunlay wrote.

Dunlay claims that his wife had joined their daughter after her 14-day isolation but forgot to take medicine for the 14-year-old family dog Squeaky. 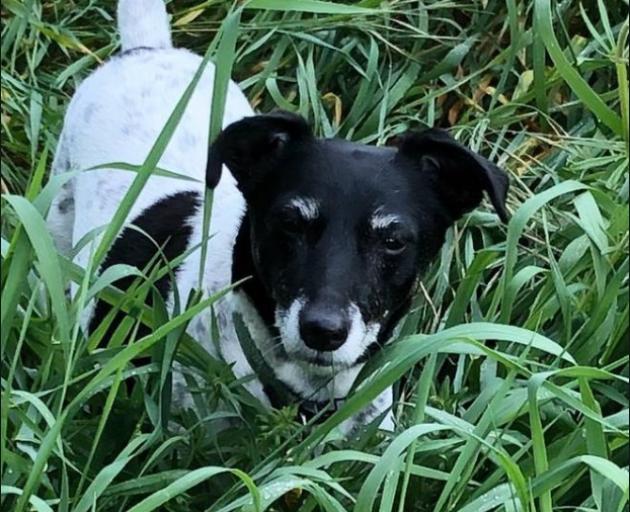 Squeaky, the dog at the centre of the stoush. Photo: Facebook
He said he also visited the property to deliver food and supplies to the pair and to support his daughter, who had experienced a "very stressful" time flying home from the UK.

Dunlay claims he checked with a vet before making the journey and was told that delivering medication to an animal was considered "essential".

Advice on the Ministry of Primary Industries website states that: "Travel to care for your animals, is allowed. This includes providing your animals with food, water and any other aspect that you need to provide to meet your responsibilities under the Animal Welfare Act and relevant codes of welfare."

Dunlay added that he researched the regulations with his wife and the pair decided the trip did not constitute a breach.

He added that he travelled alone and did not meet anyone else during the journey.

Dunlay claims that two of his colleagues were aware of his trip and expressed their concerns to a manager, who passed it on to senior management.

Mediaworks then ended Dunlay's contract, citing damage to their reputation.

A spokesperson from Mediaworks said in a statement:

"MediaWorks was incredibly disappointed to learn that Dave Dunlay decided to travel from his home to another location during the Alert Level 4 lockdown... His actions compromised not only the safety of his colleagues but the efforts and sacrifices of all New Zealanders who are adhering to the rules as we fight against Covid-19.

"MediaWorks wants to make it very clear that it has strict policies in place to ensure we keep our people safe and comply with all Government lockdown regulations.

MediaWorks made it very clear to staff that they must adhere to the rules as we fight against Covid-19."

Dunlay wrote that while some might think his employer was justified, he believed the response was "heavy-handed".

"I appreciate that some people reading this will think fair enough, you're an idiot for breaking the guidelines put in place for the well-being of all New Zealanders, and the loss of my job is justified," he wrote.

"However others would argue that this is an extremely heavy-handed response and a two-week stand down without pay could have been a better option."

Dunlay also spoke out against the two colleagues that reported his trip to their superiors.

"What is disappointing is that my two colleagues, who had concerns about my breach, did not mention any concerns to me," he wrote.

In a statement to the Herald, Dunlay said he stood by everything he wrote and said that he was confident that his journey was permissible under lockdown.

"Given the personal circumstances and given the research I had done, and the questions I had asked about the government advice, I was confident that my reasons for travelling were reasonable grounds," he said.

"The police's efforts were on education and over the Easter break they let many people travel if they had reasonable grounds. The police were checking with every driver to ensure their travel was essential travel – I was confident my travel was.

"At the end of the day I made a decision and it cost me my job. I have already apologised to MediaWorks for any potential harm my actions have caused them.

"I am still at a loss though to know which law or breach of ethics I broke – this is still a very grey area in very stressful and uncertain times."

Telling supporters that the incident was the only time in a forty-year career that he faced a disciplinary issue, he vowed not to let it "negatively mark" his time in the media and paid tribute to his listeners.

He told the Herald that he has been "blown away" by the support he had received since sharing his story.

"I will remember my time spent with the Breeze Canterbury audience fondly, and the great people I have worked with in radio. Stay safe and be kind."

It's about not being an Island.

Were the Grassy Greenes (colleagues) in Sales?

"...Mediaworks then ended Dunlay's contract, citing damage to their reputation..."
I'd say that Mediaworks has probably done more harm to their reputation by firing this guy, for what any responsible pet owner would do also. At least Dave now has the jump on his colleagues in the job market, as I am sure there will be many, many more Mediaworks staff on the dole soon. Maybe Dave should name the two 'dobbers', so future employers can avoid a snitch culture behind the backs of others in their work places!

Quote: "Dunlay claims that two of his colleagues were aware of his trip and expressed their concerns to a manager, who passed it on to senior management."

This is where it all goes wrong. narks and snitches. They could have shown some compassion, and maybe suggested that Dunlay speak to management himself about the situation rather than go behind his back and take matters into their own hands. Based on the fact Dunlay had researched the Animal Welfare Act and had also consulted his vet, and that travel to take care of animals is allowed, many of us would have done the exact same thing.....delivered the vital medication.
The whole Covid thing is stressful enough, without heartless back stabbing narks creating gossip and anxiety. Anyway, I would be quite sure they're very gratified in their actions and that MediaWorks feel justified in such a heavy handed response.

sounds fair enough to me . There is a bit of lying by omission going on here. This well paid with second home has left his wife and daughter out on the farm with no car? I think not. Instead of breaking the bubble multiple times of his own family instead of having them drive to the vets (still open) or to the shop/supermarket by themselves as is supposed to do. He had to take them food ,were they prisoners? is his wife really old and can"t drive? come on you fundamentally broke all the rules a radio host still working and interacting with other staff then going to visit his recently returned daughter and wife. Sounds like entitlement to me by another rich ar****le. Don't say this often but good on you Media Works.