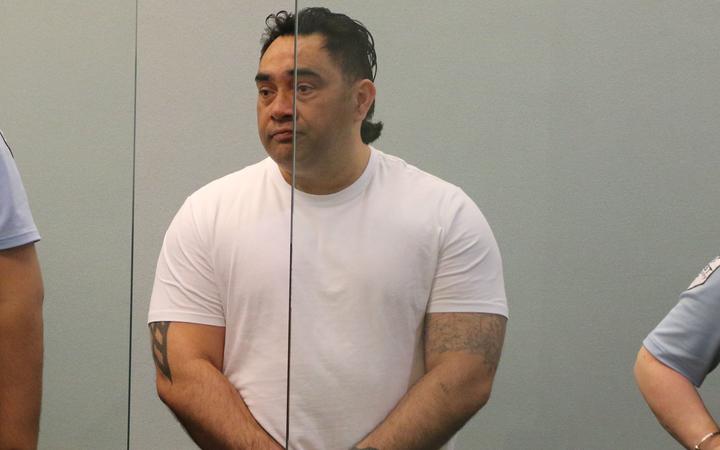 Benny Haerewa at sentencing in the High Court at Auckland .Photo: RNZ
The man who killed a Hawke's Bay child 20 years ago has been jailed for nine years for more crimes.

Benny Haerewa appeared in the Auckland High Court in May where he pleaded guilty to 11 violence and sexual violence charges committed between 2015 and 2017.

Haerewa was freed from jail in 2010 after completing a 12-year sentence for the manslaughter of four-year-old James Whakaruru. At the time, the Parole Board expressed grave fears about Haerewa's likelihood of reoffending but, having served his full sentence, he had to be freed.

Haerewa appeared before Justice Powell for sentencing in the High Court at Auckland today.

The Crown sought a sentence of preventive detention but after hearing arguments Justice Powell found the man was not eligible.

He jailed him for nine years with a minimum non-parole period of six years- meaning he will come before the Parole Board in 2025.

During his sentencing today, Justice Powell detailed the offending, which included threatening a victim with a tomahawk and wrapping an extension cord around her neck.

He also slapped and smacked a child's head and threw a can at them on their birthday.

Mr Teppett accepted that Haerewa's childhood had been scarred by violence, alcohol and drug use, but opposed a discount for cultural deprivation.

He said the defendant's high risk of reoffending, outlined in a number of psychological reports, meant he was eligible for an indefinite sentence of preventive detention.

Haerewa's lawyer Jenny Verry argued for a finite sentence and said her client's background, which included prospecting for the Mongrel Mob at 15 years old, should result in a sentence discount.

She said he would have to work on his anger and violence problems for the rest of his life but accepted the Crown's submission that Haerewa couldn't keep receiving a discount for his cultural background when he continued to offend.

Justice Powell said the offending was very serious and that Haerewa had used violence to make his victims feel powerless and under his control.

After hearing submissions Justice Powell decided Haerewa was not eligible for preventive detention.