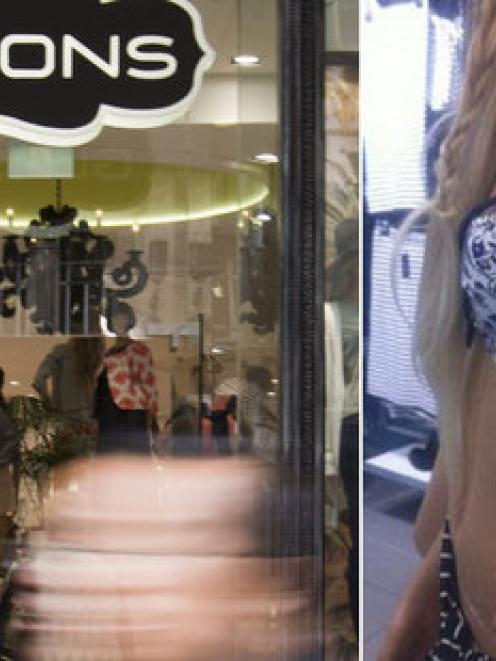 Glassons skinny mannequin. Photo Twitter
The head of one of New Zealand's biggest fashion brands has defended the use of skinny models saying "clothes look better on skinny people".

The comments, from WORLD co-founder and chief executive Denise L'Estrange-Corbet, follow public outrage over the use of mannequins with visible ribs in high street fashion chain Glassons.

Speaking to TV One's Breakfast programme today, L'Estrange-Corbet said thin models in the fashion industry was "nothing new" and would be unlikely to change in the future.

"Let's face it, clothes look better on skinny people," she told the show this morning.

"I see Miley Cyrus openly smoking dope as a much bigger issue than skinny mannequins."

Appearing alongside her on the breakfast show was Emily Robins, the actress and singer who first posted an image of the Glassons skinny model to Twitter which sparked a social media outcry.

She was prompted to take the photograph while shopping with her 17-year-old cousin, she said.

" ... I didn't want her to feel like she had to be that size to feel good in the clothes".

She hoped the attention and support she has received would drive a change in the industry, she said, adding, "I think we can deconstruct idealised body images over time".

"We need a wider range of female representations in fashion."

However, L'Estrange-Corbet's comments have not been met with support on social media, with Twitter users describing them as "ignorant" and "judgmental", while another said her interview was a "train wreck".

One woman posted: "Things I am not interested in: Denise L'Estrange-Corbet's opinion on anything."

Glassons has previously defended its use of the mannequins, with chief executive Graeme Popplewell saying the mannequin's BMI of 18.8 put it within the healthy weight range of 18.5-24.9.