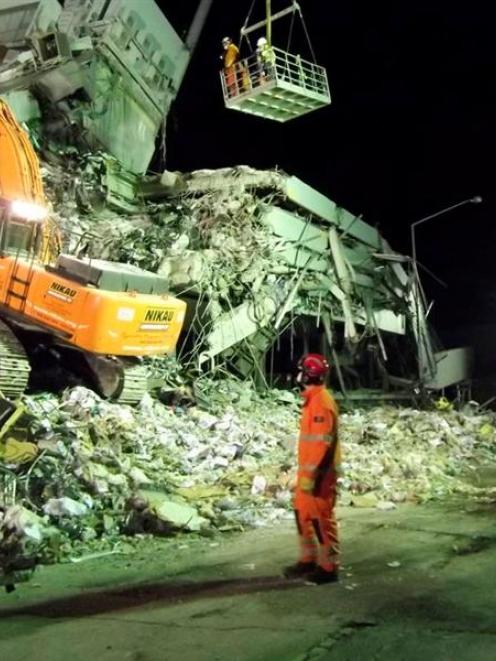 Urban Search and Rescue teams work through the night at the Pyne Gould Corporation building in Christchurch
The two buildings which claimed the greatest number of lives in the earthquake were built on soft soil prone to a "large increase in shaking" and had "very high" susceptibility to liquefaction.

The risks are outlined in Quotable Value (QV) property hazard reports which reveal common features of concern for the sites of both the Canterbury Television (CTV) and the Pyne Gould Corporation (PGC) buildings, where more than 100 were killed.

The reports come as the Government ordered an inquiry into the safety of affected buildings. Prime Minister John Key said yesterday as many as one-third of the CBD buildings might have to be demolished.

The hazards identified by QV for the two worst-hit buildings are also likely to apply to other buildings in Christchurch because of the natural ground conditions.

The owners of both the CTV and PGC buildings say they were given clearance after the last big quake in September and engineering reports had been carried out.

But concerns have been raised publicly about the safety of the CTV building.

"If we had known anything was wrong with the building, I would have pushed it over myself," Mr Hunter said.

CTV chairman Nick Smith, of Dunedin, who is also Allied Press business manager, said he had no qualms about trusting the judgement of the building owner and engineering reports they had ordered.

"I'm not an engineer. You accept the expert advice, and you hope it's correct."

The property hazard reports for both buildings, compiled from a variety of official sources, say they are on ground classified as "very soft soil".

"In a strong, close-by earthquake, these materials could cause ... a moderate increase in shaking for high-rise buildings.

"In a strong distant earthquake, these materials are likely to cause a large increase in shaking."

The reports also state the buildings are "in an area where the ground is classified as having a susceptibility to liquefaction that is very high".

"The report recommended internal and external work be undertaken to repair superficial damage to the building fabric sustained in the earthquake and its immediate aftershocks.

"This work was under way at the time of the building's collapse," Mr Jones said.

"The February 22 earthquake appears to have generated unusual forces that relatively modern buildings built to recent seismic standards were not able to withstand."