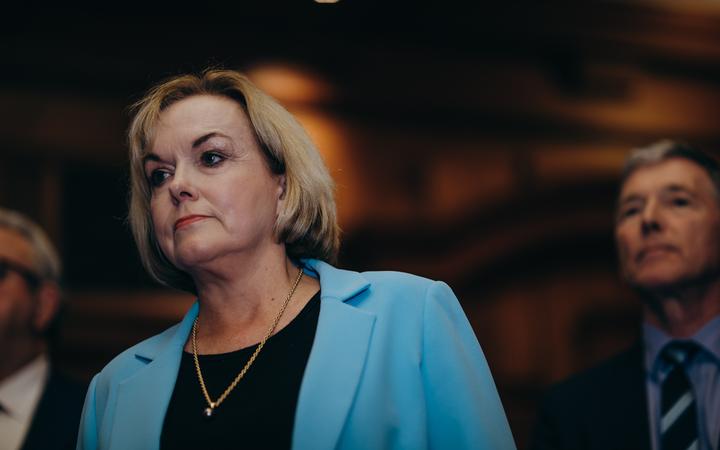 Judith Collins. Photo: RNZ
Tensions have flared over race relations again at Parliament, with outspoken National MP Judith Collins saying she was "sick of being demonised" for her ethnicity.

National has been under fire for not having any Māori MPs in its top 12, in the line-up revealed by new leader Todd Muller on Monday.

Yesterday Collins pushed back, asking reporters if there was "something wrong" her with being white.

Today during a hearing of Parliament's Finance and Expenditure committee, she reacted to questions being asked by Labour MP Tamati Coffey about the treaty partnership and government procurement.

"Oh no", shot back Collins,"it's actually someone who is utterly sick of being demonised for my ethnicity thank-you very much."

Coffey protested saying he wasn't even talking about her and apologised to the submitter.

"Is he apologising for Deborah's comment or for his?" interjected ACT's David Seymour.

He has repeatedly talked about Shane Reti, ranked at number 17 in the line-up, as a valued member of the caucus and an up-and-coming MP.

Reti was targeted by Labour's Māori caucus co-chair and government minister Willie Jackson in the House after the National MP asked a question about employment programmes.

"Māori, ethnic communities, Pasifika and disability groups... those are the people we'll continue to fight for and shame on that member for not standing up for his people!"

Dan Bidois - ranked at number 46 - has also been cited by Muller as a talented Māori member of the caucus, and one with an important portfolio responsibility, Workplace Relations and Safety.

He told RNZ he "fully rejected identity based politics", and the "notion that we have to have a certain amount of ethnicity, or particular type of Māori".

New Zealanders wanted a government that would deliver for them, to improve the economy and get the country "out of this mess", Bidois said.

He and new deputy Nikki Kaye blundered their first sitting day at Parliament while trying to defend the lack of Māori representation on the front bench.

Yesterday at the party's first caucus under the new leadership Bennett made no attempt to her hide her amusement about how it all played out, but today offered her support.

"I think [they] have done a remarkable job to start with ... a few bumps yesterday but they will pull themselves together, they're heading in the right direction."

It was a lot of pressure, she said, but nothing Muller would not be able to "stand up to".

Bennett was demoted to number 13 and was cited several times by Muller of an example of a Māori MP on the front bench.

Bennett was asked what she thought of the criticism aimed at National as a result of the controversy.

"We have a proud history of the work we've done with Māori in this country and I reckon that these guys, and we can, continue to do that; judge [us] on the actions of what we do, not actually the overall ethnicity of some of those on the front bench."