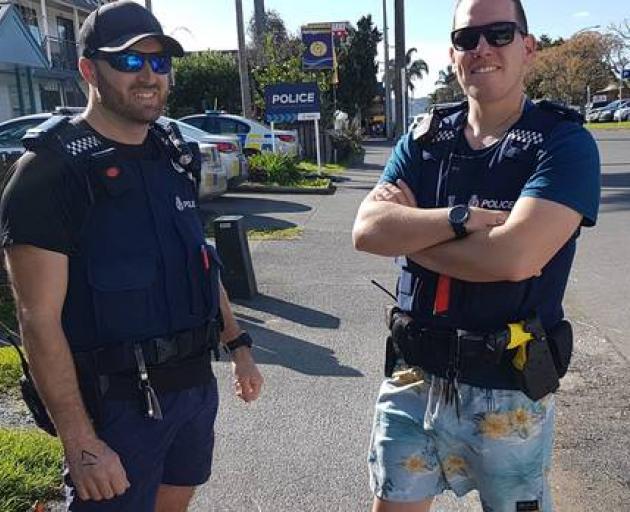 Acting sergeant Rob Eke and Constable Tal Easton still in their togs after nabbing a wanted man during a mid-winter swim in Paihia. Photo: NZME
A wanted man in Northland found out the hard way there's no such thing as off-duty cops — even when they're in their togs.

Whangārei's road policing unit was in the Far North on Sunday as part of a five-day operation targeting speed and restraints when the officers heard a mid-winter swim was about to take place in Paihia.

Acting Sergeant Rob Eke said he ''pretty much'' talked the younger officers into taking part as a community engagement exercise.

Six officers took the plunge, adding to the challenge by donning their uniform shirts and trousers over their togs before swimming to a pole 100m offshore and back.

''We'd finished the swim and were waiting for prizegiving when we became aware of a guy walking along the beach. We'd dealt with him earlier in the week and he was wanted by police,'' Eke said.

The officers abandoned the prizegiving and threw their stab-proof vests and radios on over their still-wet togs.

In the meantime the man had made himself scarce but he was soon located on nearby Kings Rd, where he was arrested by a group of officers in beachwear which included a fetching pair of floral-print board shorts.

''He was probably a bit surprised to see us like that,'' Eke said.

It was fortunate the alleged offender didn't try to run because the officers were wearing wet jandals.

The Paihia man was charged with breach of bail and spent the night in custody in the Whangārei police cells. He was due to appear in the Kaikohe District Court on Monday.

Mid-winter swim organiser Karen Markin said 67 people took part in the event, which had been held on the shortest Sunday of the year for the past nine years.

Wetsuits are banned during the dip, which is followed by spot prizes, home-made soup and mulled wine.

The event draws some highly competitive swimmers but most take part for fun with many donning fancy headwear.

Markin said conditions this year were ''positively balmy'' with an air temperature of 17 degrees C and the water at 14.6C.

''It was good to have the police there, it showed them in a different light,'' Markin said.

The prize for the last swimmer to finish was awarded to police officer Nicola Anderson.

The fastest swimmer was Archie White of Kerikeri in 2 minutes 51 seconds with Pip Holland of Orewa the first woman in 3 min 40s.

Nadia Lehmann of Opua took out the prize for best headwear.