The cost of care: Wife and sick husband about to lose home 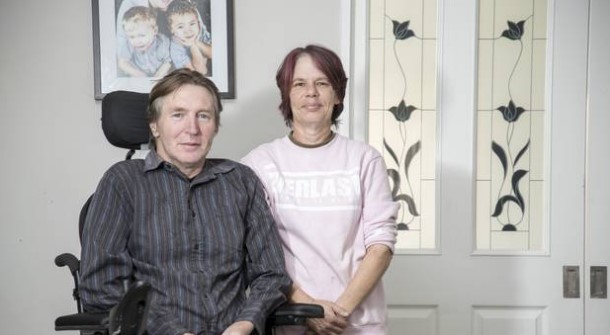 The couple, who are unable to work, receive less than $500 a week from the government but say they may be forced to sell their house and move away from Auckland and family to survive.

Minister for Social Development Carmel Sepuloni told the Herald she had asked her ministry for urgent advice on the case.

Grant Lovatt, 58, was diagnosed with motor neurone disease in 2012. In 2014 a neurologist gave him less than 12 months to live.

Five years later the Massey man has defied that prognosis. But he spends his days in an electric wheelchair and is completely dependent on his wife Glenda, 53, for full-time care.

Glenda Lovatt dresses, toilets and feeds her husband, and showers him with an assistant.

She cares for Grant herself rather than see him in government-funded care. But it comes at a price — the Ministry of Health does not pay spouses who care for disabled partners at home.

Instead she is living on an offshoot of his Supported Living Payment from Work and Income. Between them the pair get $494.20 per week, including accommodation supplement, supported living payment, and disability allowance and after deductions and debt repayments to Work and Income are taken into account.

Their combined income pays for rates, mortgage and house insurance. A boarder helps cover costs, but they still come up short each week.

The pair say they survive off food parcels and charity from friends and family. Glenda has lost weight and most of her teeth from the strain.

She wants to highlight how little people who can't work due to disability receive from the Government — even if, like Grant, they have paid taxes all their life.

This year the Lovatts begged the Government for more financial help. But a letter from the Ministry of Social Development said they were getting their entitlements — and explained that benefits were designed "to make sure that beneficiaries do not receive more ... than people who are working full-time".

Their worst-case, and most likely, scenario, is to sell the house and leave Auckland, with Grant dying far away from their children and grandkids.

"It breaks my heart to see such a strong, independent man who owned his own business be treated with such uncaring and unwavering sticking to the rules," Glenda Lovatt said.

"All I want is for him to have the quality of life he deserves in the time he has left," Glenda Lovatt said.

A Motor Neurone Disease NZ spokeswoman said "anecdotally" it has heard of similar cases althought it was hard to know why people had been turned down for funding. Benefits could vary widely depending on factors like age and home ownership.

The Minister for Social Development, Carmel Sepuloni, said she had asked MSD for urgent advice on the Lovatts' case.

She expected the new Welfare Expert Advisory Group to look at whether incomes provided by MSD were adequate.

"Our immediate job is to turn around the culture created by National where people struggled to get what they were entitled to. I've been clear that has to stop," Sepuloni said.

The Ministry of Health last night confirmed that spouses were not eligible to be paid under the ministry's Funded Family Care policy.

"The Minister and Associate Minister of Health have asked officials for advice on the current policy and are considering that advice," a spokeswoman said.

Following contact from the Herald, the Ministry of Social Development cut the Lovatts' debt repayments from $25 to $5 per week. From July 1 they will also get a Winter Energy Payment of $31.82 under the new Families Package.

Glenda Lovatt welcomed the changes but said their income was still not enough for a decent life.

Ministry spokesman Mark Goldsmith said MSD appreciated the Lovatts were trying to make the best of their situation.

The ministry was regularly in touch with the family.

"We work hard to ensure fairness for people who need our help and make sure everyone that comes to us receives their full and correct entitlement."

How is this allowed to happen?, the man became sick and because of draconian measures this couple will loose their home and the chronically ill single people who have to be on a benefit get nothing, it mostly goes to the single mothers and families.
About time the chronically ill got a chance at a decent income, this is not a lifestyle choice for them.

While agree the govt should help those in need i feel these people are taking advantage if they still have a million dollar home they could sell.
Why are they even getting benefits before using THEIR OWN RESOURCES?
If they we poor id say help them more BUT while they still own a very valuable asset i would suggest they are taking advantage.
Benefits are supposed to be there to help people with little or nothing NOT KEEP THEM IN THE LIFE THEY BECOME ACCUSTOMED TOO.