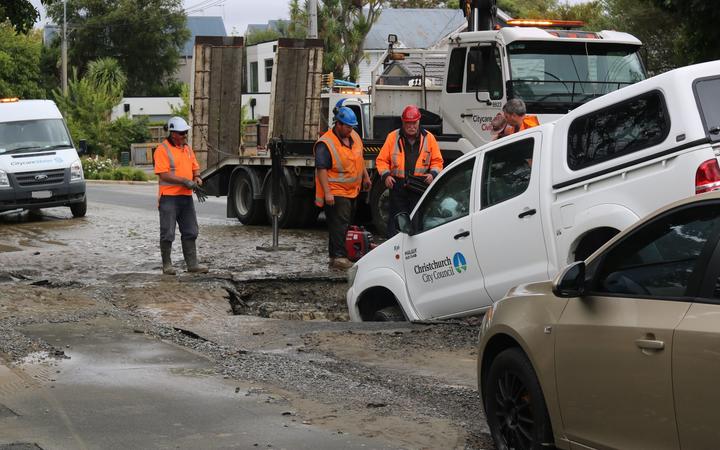 Worcester St was closed between Fitzgerald Ave and Stanmore Rd while the muddy water from the ruptured pipe receded from pavements and front lawns.

A resident on the street, Mike Cox, said the water main burst shortly after noon.

The water bubbled up from the middle of the road, thickened with silt and funnelled onto several low-lying properties, including his.

"It was right at the front door.

"We were actually worried it would get to the floorboards, that the carpet would get wet, but we're lucky it was only millimetres away from getting that high," he said.

Cox said his back lawn was swamped and his front lawn was a "swimming pool", so he's grateful the council responded to his phone call for help.

But one of the staff members who responded was caught out by the sinkhole that formed around the ruptured pipe, with their truck landing nose first.

In a statement, a city council spokesperson said more asphalt gave way as the vehicle stopped.

"The driver is okay and the vehicle has since been towed out of the hole," they said.

Mike Cox was setting to work this afternoon cleaning up, along with several other neighbours.

"At least our grass will be really green," he said.