The dropping of firearms charges against the "Urewera 18'' is a victory for common sense, Green MP Keith Locke says.

The Crown has dropped all firearms charges against the so-called Urewera 18'', arrested after police raids on alleged military training camps in the Ureweras in October 2007, after the Supreme Court ruled certain evidence inadmissible.

However, four of the accused - Maori activist Tame Iti, Te Rangikaiwhira Kemara, Emily Bailey and Urs Signer - will still stand trial on charges of participating in an organised crime group.

Mr Locke told APNZ he was not surprised the firearms charges had been dropped and accused the police of laying them to justify their approach to the raids.

"If the police had some information that some young activists were playing around with guns in the hills, they should have just done normal policing and asked them what was going on instead of this massive intelligence operation over a year or two, costing the country millions of dollars, on the basis that this was some terrorist conspiracy,'' he said.

"The terrorism charges fell over (some years) ago and the police seem to have been on a campaign to prove that they were right in the first place by pursuing these arms charges, and now they've fallen over.

"It could have been handled in another way of policing, by talking to the individuals concerned at an early stage.''

Those involved had had the charges hanging over them for ``four long years'' but could finally get on with their lives, Mr Locke said.

"It is a victory for common sense.''

The early morning raids in October 2007 involved more than 300 officers in property searches in Auckland, Waikato, the Bay of Plenty, Wellington and Christchurch using warrants alleging crimes under the Terrorism Suppression Act.

The Solicitor-General subsequently ruled out charges under the Terrorism Suppression Act _ saying the law was "almost impossible to apply in a coherent manner'' - but firearms charges remained.

Auckland Crown Solicitor Simon Moore, SC, said the judgment of the Supreme Court was subject to suppression orders and could not be reported.

However, as a result of the Supreme Court decision, the Crown no longer believed there was sufficient evidence to justify the Arms Act charges.

Separate trials would have been needed for those charged under the Arms Act and the four accused of the organised crime offences.

"The effect of the delay would be that those accused facing Arms Act charges alone would not be tried for a period of 4-1/2 years from the date of their arrest,'' Mr Moore said.

"Further, they were remanded in custody for a period of time following their arrest, and they have been on restrictive bail conditions through much of the time since their release.

"Taking these matters into account, together with findings made by the Supreme Court about the seriousness of their offending, it is the Crown decision that the continuation of proceedings would not be in the public interest.''

A spokeswoman for police national headquarters said police had nothing to add to Mr Moore's statement as some matters were still before the courts.

"There are still four of them that are facing potential legal action, and on that basis I don't want to corrupt that process,'' Mr Key said.

But Omar Hamed - one of those to have had the charges dropped - said the drawn-out process had cost relationships, jobs and homes.

"The stress of it... the stress on your family, friends, relationships and on your work means you cannot plan,'' he said.

"The police used that to try to break us down but none of that worked and we held out.''

Mr Hamed said he received today's news at a protest for West Papua.

"I got the phone call from the lawyer. He said: Oh, you're walking, congratulations.

"Apparently, I owe him lunch.''

Mr Hamed said he always knew that the charges would be dropped.

"It's a real victory for common sense and New Zealand sticking up for human rights.''

His former co-accused, Valerie Morse described the case as a ``disaster from start to finish'' and an indictment on the police.

"They arrested us and put us in prison while they tried to charge us with terrorism. That failed. Now after four years, millions and millions of dollars, and systematic denial of rights to accused, the case has totally failed,'' Ms Morse said.

Veteran activist and protester John Minto said the dropping of the charges was a victory for civil liberties and common sense, but it had come four years too late.

"The saddest thing about this is that for each of these defendants, despite the dropping of the charges, this issue's going to chase them for the rest of their lives because whenever their names go into an internet search they're associated with these terror raids.''

Mr Minto said it was obvious that police had dragged the case out for so long because they wanted to save face after laying the "baseless'' charges.

"It was the most irresponsible police action that I can recall in my lifetime,'' he said. 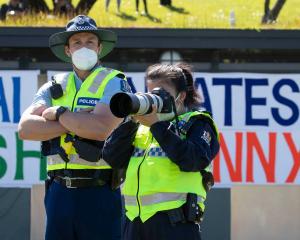