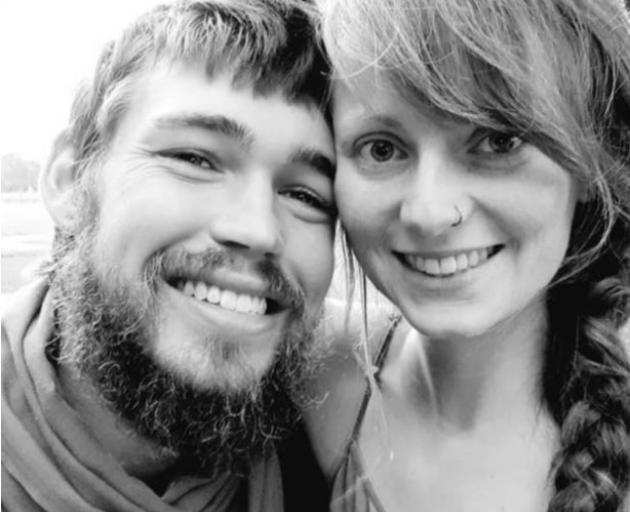 Enoch Orious - aka Jamie Burfoot - and his German partner Anna. Photo: via Facebook
The tourist who sparked controversy after eating at a soup kitchen in an attempt to travel the country without spending any money has spent much of his life in New Zealand.

Enoch Orious and his German partner Anna made headlines today as tourists hoping to travel the country without spending any money - using charities or dumpster diving when they needed to get by.

Jamie's father Jeremy Burfoot told the Herald his son liked to go by the name Enoch.

It was understood Jamie grew up on Auckland's North Shore and had previously attended Westlake Boys' High School.

His father said Jamie was an Australian citizen, but had lived in New Zealand for much of his life "on and off" between travels.

"He's got a good heart" and he was genuinely trying to get by without spending money, he said.

His free-spirited son had lived at Wilderland in the Coromandel for about six months where he met his partner Anna, a German tourist, he said.

According to the website, Wilderland was for students and volunteers who wanted to collaborate in a range of ecological farming and sustainable living practices.

The couple made headlines today when a Wellington city councillor called them out, saying the soup kitchen was not there for tourists trying to travel on the cheap.

Social Development portfolio leader Brian Dawson told Newstalk ZB they should not be taking advantage of the system.

"I don't think it's appropriate to be using soup kitchens or social services just because you want to be able to travel around on the cheap," he said.

On the couple's Facebook page, Free From Money, they said they had faced a huge backlash on social media including "people wishing us death".

They said they had both started volunteering at the Free Store and hoped to get involved in more charity work in Wellington and around the country.

Wellington's Sisters of Compassion Soup Kitchen manager Karen Holland told Newstalk ZB she did not view the tourists differently to any of the other guests.

"I don't feel any differently towards the backpackers. If they came in, then I do towards any of the whanau that come and eat at the soup kitchen," she said.

"We operate on the principle of manaakitanga where we offer hospitality to whoever comes, we ask no questions, and we treat everybody with a great deal of respect."

But she told Newstalk ZB she could understand how Wellingtonians might feel about it.

"They are designed for people in need and, yes, I can understand why people are upset about it," she said.

"I think it's because the people of Wellington hold the Compassion Soup Kitchen quite close to their heart - they donate to it, they care about it and they are really appreciative of the mahi that's done here at this place.

"And I think that they feel that it is a sign of disrespect when people that can afford to buy food come and take advantage - but we at the soup kitchen can't allow ourselves to feel that way."

Insular of The Peninsula.

Sounds IB if your siding with the scammers.....its not nice to do this type of thing same as fraud . The death threats they may have had would be all hot air...these two have annoyed .......many.

When you disagree with other opinion, try to be less insulting. The user name is IB Prolix. In reality, providers are aware of these travellers and make their own decisions.

Internet negativity about the NZ experience may be Spin, but the overseas sites exist as travel advisories.

Nothing is ever FREE. Someone somewhere has paid for it. Him being a citizen makes it worse as he thinks its Ok to sponge on the generosity of others. Some one should tell them that it is illegal to work for kind and also dumpster diving is thieving.
There has been cases of people charged with stealing from skips.
I have lived in a village with constant building and residents have been warned that the stuff in the skips belongs to the builders and should not be touched.

That's true, but dumpster diving, or freganism, is common overseas. In NZ, unsold Supermarket food is shared to charity agencies. Not sure the really down and out would be interested in building supplies.