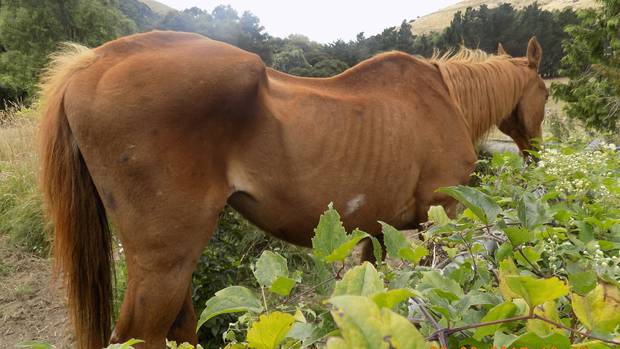 Tubby was found in a very thin body condition on Rufus Culliford's Tai Tapu property. Photo: Supplied
The owner of an emaciated horse found by SPCA inspectors to be a "bag of bones" has today narrowly avoided jail and been banned from owning horses for three years.

Rufus James Culliford was sentenced today after admitting a charge of failing to provide sufficient food for the animal. The charge carried a maximum penalty of 12 months in jail and/or $50,000 fine.

Christchurch District Court heard how an SPCA inspector visited Culliford's Tai Tapu property outside Christchurch on December 13, 2015 after getting a complaint about a horse alleged to be in poor body condition.

The inspector saw an aged chestnut mare, known as Tubby, in "light body condition", with her ribs, backbone, and hip bones clearly visible.

Culliford told the inspector that he had been trying to put condition on the horse but felt she was "on the decline" and was considering euthanasia, according to the SPCA summary of facts.

He said that he hoped to acquire the service of an equine dentist in the New Year and agreed with the inspector that an up-to-date veterinary health assessment would be a good idea.

But by May 2016 Culliford had not got a vet or equine dentist. Tubby was still in very poor body condition, and the owner was issued with a direction to get Tubby either checked by a vet or put down within three days.

Culliford didn't do either and when a vet, directed by SPCA, came to assess Tubby on May 11, she was found in a very thin body condition, with access only to very short grass with heavy faecal contamination.

Tubby also had a large amount of soil within her teeth and mouth, and her mouth was ulcerated inside the lips, as a result of repeated attempts to get a food source from the lack of grass cover present.

Tubby was then taken into the possession of the SPCA inspectors.

A dental care and feeding plan was put into place to allow Tubby to gain condition and by late July 2016 was in a healthy body condition.

Tubby was returned to Culliford on July 30, 2016 with a feed plan and a follow-up dental appointment was arranged.

Culliford cancelled the appointment and when the SPCA came back to his property on February 8, 2017, the SPCA again found Tubby's condition had deteriorated.

They took Tubby away again and found the thin horse also had a small wound on her right foreleg.

A vet concluded that her body condition was not that of an old horse, but that of a malnourished animal.

While in the care of the SCPA, Tubby became unwell and was diagnosed with a large intestinal impaction, which required surgery that due to her age and body condition was not considered to be a viable option.

Culliford was charged and originally pleaded not guilty.

However, he later admitted failing to provide proper and sufficient food.

At sentencing today, Judge Kevin Phillips said at the outset that the starting point must be one of imprisonment, describing the neglect as being at "an extremely high level".

Judge Phillips said he had seen photographs of the horse, which left him wondering how anyone could have an animal in their care in that condition. Tubby would have been in significant pain and distress as a result of the neglect, he said.

But defence counsel Shawn McManus argued for a long period of community work rather than a sentence of imprisonment. She said jail should only be used as a last resort.

McManus said Culliford, who has an elderly family member who depends on him, now accepts his fault and is remorseful.

Judge Phillips said he thought long and hard about the final sentence, and decided on 300 hours of community work and a fine of $1500.

He also ordered Culliford to pay the SPCA $750 for legal fees and $3935 for Tubby's vet expenses.

The judge also ordered the forfeiture of any horse in Culliford's possession and banned him from owning any other horses for three years.