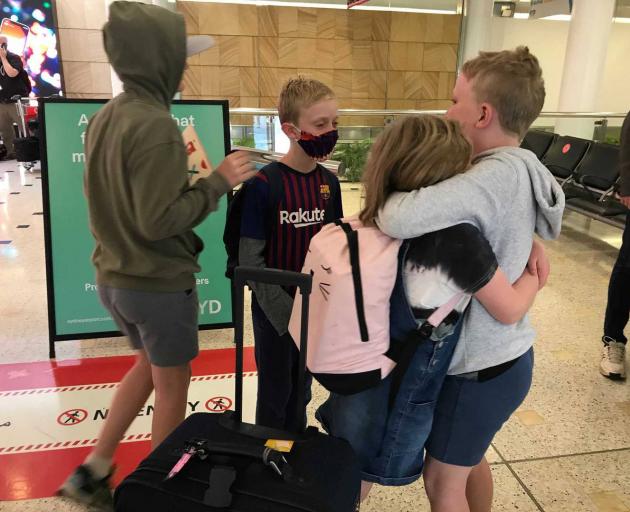 Cousins Milly and Lucas reuniting with Ben and Sam in Sydney. Photo: Sophie Trigger
A two-way travel bubble between New Zealand and Australia has finally begun after more than a year of closed borders.

Auckland Airport welcomed the first flight from Australia at 12.30pm.

Seamus Matamua and his fiancé Auilagi Vaifale are waiting patiently, and a little nervously, to see Matamua's parents arriving from Sydney shortly. 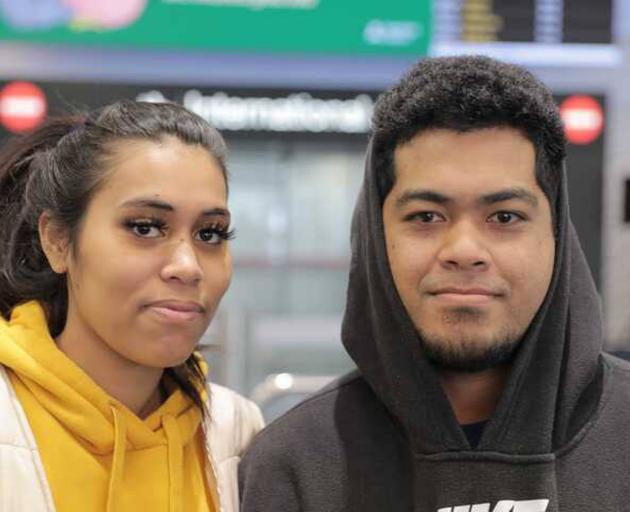 Auilagi Vaifale and Seamus Matamua. Photo: NZ Herald
It's the first time Vaifale would have have met them, with the couple marrying in June. "I'm very excited, but a bit nervous," she told the Herald.

Matamua said it had been over two years since he'd seen his parents and he could not wait to be reunited.

"It's going to be quite emotional. I'm really looking forward to them finally meeting Auilagi."

It was also a chance to celebrate his mother's 60th birthday from March, when they'd meant to fly to Australia but had to cancel because of rising Covid-19 cases there.

On the first transtasman flight from Wellington to Sydney this morning, there was a joyous energy that filled the plane.

Most people on board were eagerly awaiting a reunion with with family or friends across the ditch, and the air crew were also excited to be flying again.

Australians and New Zealanders reunited in Sydney to the backdrop of balloons, signs and the music of Kylie Minogue blaring through a speaker.

There were lots of tears and hugs as parents, siblings, cousins and friends reunited for the first time in over a year. Most families did not linger at the airport - eager to get out into the Sydney sunshine and enjoy each other's company again.

About 400 quarantine-free flights per week will arrive and depart Auckland Airport on transtasman routes operated by Air New Zealand, Jetstar and Qantas by the end of April - a stark contrast to the 36 flights to and from Australia in the first week of April. 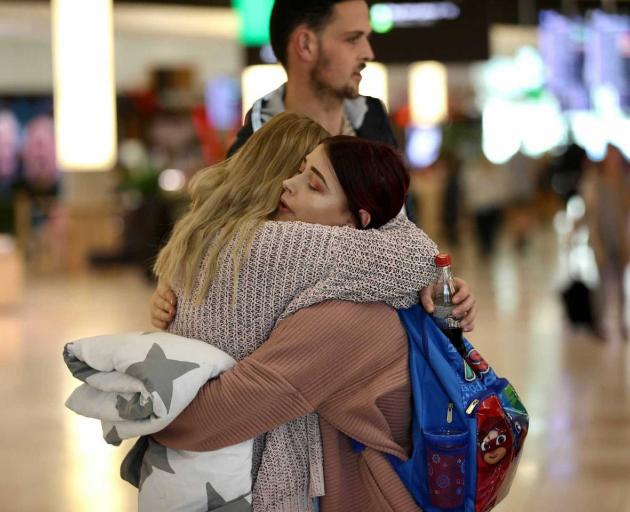 Christchurch International departures. Photo: George Heard
From July to September New Zealand is expecting an influx of Aussies arriving in the South Island for skiing and expected Australian tourism to back to 80 per cent by the beginning of 2022, and experts believe Australian travellers could shoot at least $1 billion into the national economy.

Emma and Angus Crampton were travelling to Sydney to visit their older brother Sam.

Emma had two trips to Sydney cancelled in 2020, and Sam had been unable to make her 30th birthday, which she spent in lockdown.

Having won flights through the Hits competition last week, they had just several days to get organised for their transtasman travel.

Emma said they had only found out on Friday they had won the competition.

"We were caught off guard making all the plans but we were lucky Angus is on uni holidays and my boss was so good about it."

Angus said they were so excited to see their brother Adam, and hoped he would bring his new boxer puppy with him in the car.

The siblings were best friends and this had been the longest they had ever gone without seeing each other.

Reuniting in Sydney, Sam said it was an emotional time and that "the best thing about seeing family is that everyone is still here". The family's health was the most important thing, he said.

"Now it's time to drink a thousand beers, play some golf, hang out, eat some nice food [and] introduce everyone to our puppy," Sam said.

"Now we can celebrate all the birthdays and good times that we've missed over the past 15 months."

Levi Teen was greeted in Sydney by his mum Felicity after 18 months apart.

Levi said he had been "waiting in anticipation for months" for a transtasman bubble.

When asked what he wanted to do today, he said he would go fishing and hopefully have a cold beer.

"It's really beautiful to have him home," Felicity said.