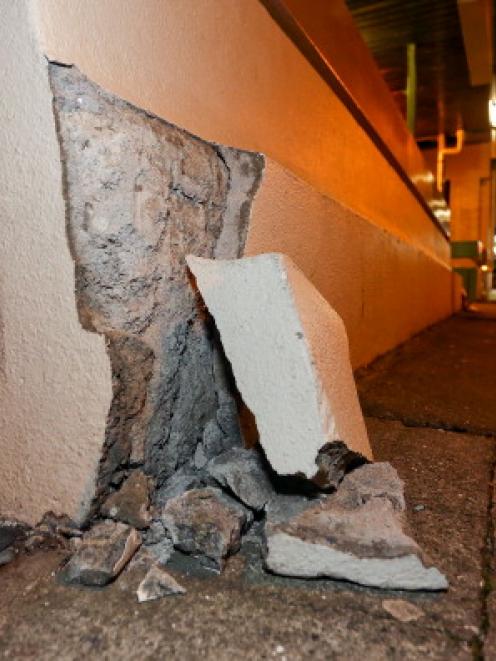 More than 100 aftershocks have been recorded since the magnitude 6.5 quake which struck in the Cook Strait at 5.09pm, including a spate of tremors reaching between 4.5 and 4.9 in magnitude struck the middle of the country about 3.15am today.

GNS Science has said there was a chance of an aftershock measuring 6 in magnitude in the next week.

Four people were injured during the 20 second-long tremor.

Ms Wade-Brown has warned people to watch out for damage and to expect disruption today as the city deals with the aftermath of last night's quake.

But, she said the city had come through the big quake "very well".

"On the whole, most infrastructure and most buildings have been unaffected - but we will obviously have engineers and experts double-checking the condition of infrastructure after daybreak."

Commuters were told to be patient as the main roads into the capital were likely to be congested as the rail networks were not operating, while safety checks were being undertaken.

Civil Defence was also advising people to stay clear of the CBD until midday while engineers assessed streets for damage.

Parts of Featherston Street, Wakefield Street and Bolton Street were closed due to suspected damage to buildings in the area.

"It is also a prime opportunity for people to check their emergency kits - and also update their family emergency plans."

Many properties at the top of the South Island were without power and Seddon residents, near the epicentre of the quake have been told to boil their drinking water, Radio New Zealand reported.

Wellington Maritime Police senior launch master Barry Hart said about five metres of reclaimed land had subsided into the sea at Thorndon Container Terminal, taking with it a large container and a buoy which was larger than a truck.

The large steel structure is a replacement for what's known as Barrett's buoy, named after the reef it sits beside, which marks the entrance to Wellington Harbour. It houses a light and solar panels that power it.

Willis Street, upper Victoria Street and Webb Street around the Mercure Hotel, along with Thomson and Nairn streets, have been blocked off due to damage to the building. Motorists from Brooklyn were advised to take alternative routes.

Wellington City Council's Civic Square office buildings would be closed to all but essential staff tomorrow while checks on the building's services were carried out.

Council staff were advised to work from home.