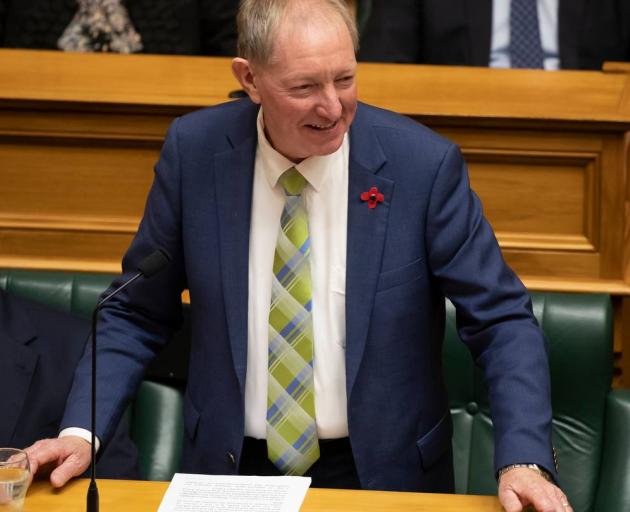 Retiring National MP Nick Smith during his valedictory speech in Parliament in June this year. Photo: NZ Herald
A young worker in former MP Nick Smith's office says he was treated like a piece of garbage, and Parliament must urgently address toxic behaviour.

The staffer was effectively blacklisted after being drawn into complaints of alleged bullying in Parliament, a trade union supporting him said.

McCarten has been advocating for the worker, who was allegedly yelled at in an outburst so extreme it led another worker to cry and lodge a complaint.

But Smith told an investigator he had high expectations of staff, and the staffer in question often didn't do the sort of work he was expected to.

The worker said anybody who believed Smith's management style was just old-fashioned or demanding should think again.

"It was pretty bad when I was there," he told the New Zealand Herald today.

"I'm from a working-class, old-school family and you don't treat people like that."

He said even demanding or old-fashioned managers knew better.

He said when he asked to work from home in a different city during the 2020 national Covid lockdown, the MP accused him of being a kid running back to "mummy and daddy".

The former MP was also accused of having meltdowns and telling the worker: "You're the f***ing secretary. This is such an easy job."

The former staffer said Parliament must do more to protect people from abuse. He said he was effectively blacklisted because he did not just disappear but instead chose to stand up to an MP.

The former staffer has since found work elsewhere.

Smith previously said the staffer swore at him and refused to carry out reasonable requests when asked.

And today he said was disappointed a confidential report with "errors" was released, and an incident for which he'd already apologised multiple times had since been embellished.

He added: "The final report did not make a finding of bullying."

Smith said more than a dozen staff worked for him during his three-decade career, most of who have become lifelong friends.

He said one Parliamentary Service employee who worked with him "for 26 years" told him she couldn't recall a time Smith ever swore or raised his voice.

Smith told the investigator of the yelling incident: "I opened the door and said in a loud voice that I wanted some quiet and it was a professional environment."

The MP rejected a claim his spit landed on a woman during this incident.

Another witness said Smith's behaviour in that incident was frightening, unreasonable and unnecessary.

In a draft investigation report, a witness told an investigator Smith yelled and screamed at the staffer.

"She felt Nick was losing the plot, but she also felt standing up to an MP was not easy.

"He's just screaming, saying: You're an embarrassment," the witness told the investigator, according to the draft.

McCarten said the staffer's lawyer told him the draft was in "all material respects" unchanged from the final report.

The draft said there was evidence the health and safety of an employee was or may have been placed at risk due to Smith's conduct or behaviour.

The worker told an investigator he "was always trying to make it work and he kept hoping that he could find the nice version of Nick".

The draft added: "He never talked with Nick directly about his concerns because it would have got nowhere."

The staffer said Smith over-reacted to chatter near his office by shouting loudly. The worker said the outburst was "horrific" and he left the building for the day.

Two weeks after the witness lodged a complaint in August last year, Smith's counter-claim drew the worker into the drama of a joint investigation, McCarten said.

"The investigation went on for eight months. The worker had to be available at all times over something he never asked for."

McCarten claimed Parliamentary Service chief executive Rafael Gonzalez-Montero did not do enough to protect or support the young staffer.

He said the worker had since found it impossible to get jobs in Parliament.

"The young worker was thrown under the bus through negligence and lack of care. He was blacklisted."

McCarten said the chief executive pledged to protect the young man's career but instead there were "whispers around the dark corridors".

McCarten said Parliamentary Service started paying for the worker's lawyer but then stopped. "He's in debt now because of that."

Gonzalez-Montero felt bad about what happened but had done nothing to make things right, McCarten said.

"It's my understanding that there is a possibility of legal action and therefore it is inappropriate to comment," Speaker Trevor Mallard said.

A witness who complained about "aggressive bullying and intimidation" from Smith said she had lost faith in Gonzalez-Montero.

"Raf promoted an open-door policy and encouraged staff to boldly speak up if ever they saw something they believed needed reporting," she said in a statement from July, sent to the Herald.

She said this was why she reported "aggressive bullying and intimidation" from Smith in July 2020.

"The fact I am writing about the situation more than a year later shows just how poorly this has been dealt with."

In May 2019, the Francis review into bullying and harassment found a toxic culture had reached virtually every part of Parliament.

The review said bullying and harassment were systemic, involving harmful behaviour by and between staff, managers, MPs, media and the public.

Inadequate pastoral care was among risk factors for bullying and harassment, the review found.

Another worker interviewed said Smith could be challenging but the role needed an older person with more life experience and more initiative.

Smith earlier this year was the longest-serving MP. He won seats in Tasman and Nelson 10 times and was elected as a list MP in 2020.

At one point he was the National Party's third-highest ranked MP. In June this year, he announced his resignation, citing an inquiry into a "verbal altercation" in his office.

When a Tory loses it, he gives it 100%. Unproductive bellicosity of the individualist Right.