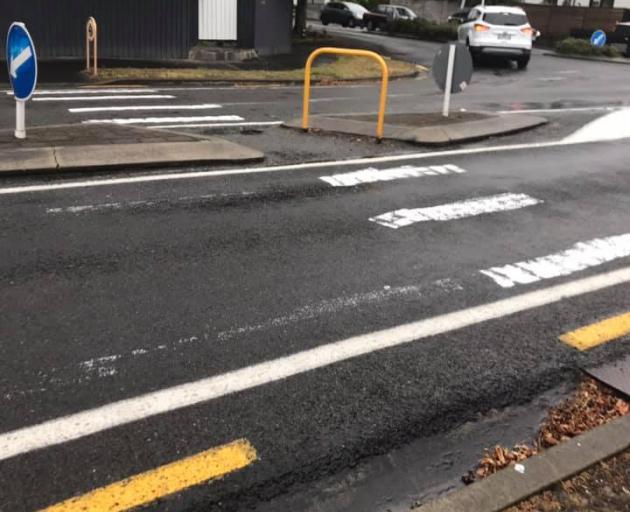 A Christchurch City Council maintenance contractor has been instructed to remove the crossing on Tennyson St in Beckenham on Friday.

It comes after a collision with a school-aged girl and a cyclist at the crossing site yesterday.

The girl’s mother, who did not wish to be named, said her nine-year-old daughter was hit by a cyclist on an e-bike when crossing the road on her way to school.

“She is very bruised up and so sore - no serious injuries.”

The mother said she did not paint the crossing, but she “takes her hat off” to whoever did.

“She's not the first kid to be hit there . . . I am going to be out there every morning and afternoon to help kids cross.”

She is planning to patrol the intersection every morning from 8.30am to 9am and in the afternoon, and has received support from Beckenham School, with the deputy principal wanting to help with the afternoon patrols.

The crossing point, which has an island in the middle of the road, is near the intersection with Norwood St and is used daily by Beckenham School pupils.

In May 2018, a boy also suffered a broken leg after he was hit by a car at the same intersection.

Concerns were raised then with the community board, which looked into the stretch of road but found it to be classed as a low-medium accident risk.

Previously, Beckenham School principal Sandy Hastings said the street was a concern for the school community and it had written letters to the community board.

City council transport operations manager Steffan Thomas said following a request from the Spreydon-Cashmere Community Board, council staff have been working on safety improvement options for the street.

They will be presenting options for discussion to the board in the near future.

"We would like to remind people that it is illegal for them to paint road markings or alter signage within the road corridor," he said.

Police received a report about the crossing about 8.30am on Friday and were in contact with the city council.

"In general, police would be concerned about any illegal or unauthorised road marking or signage which could cause road safety issues or confusion to those using the roads," a police spokeswoman said.