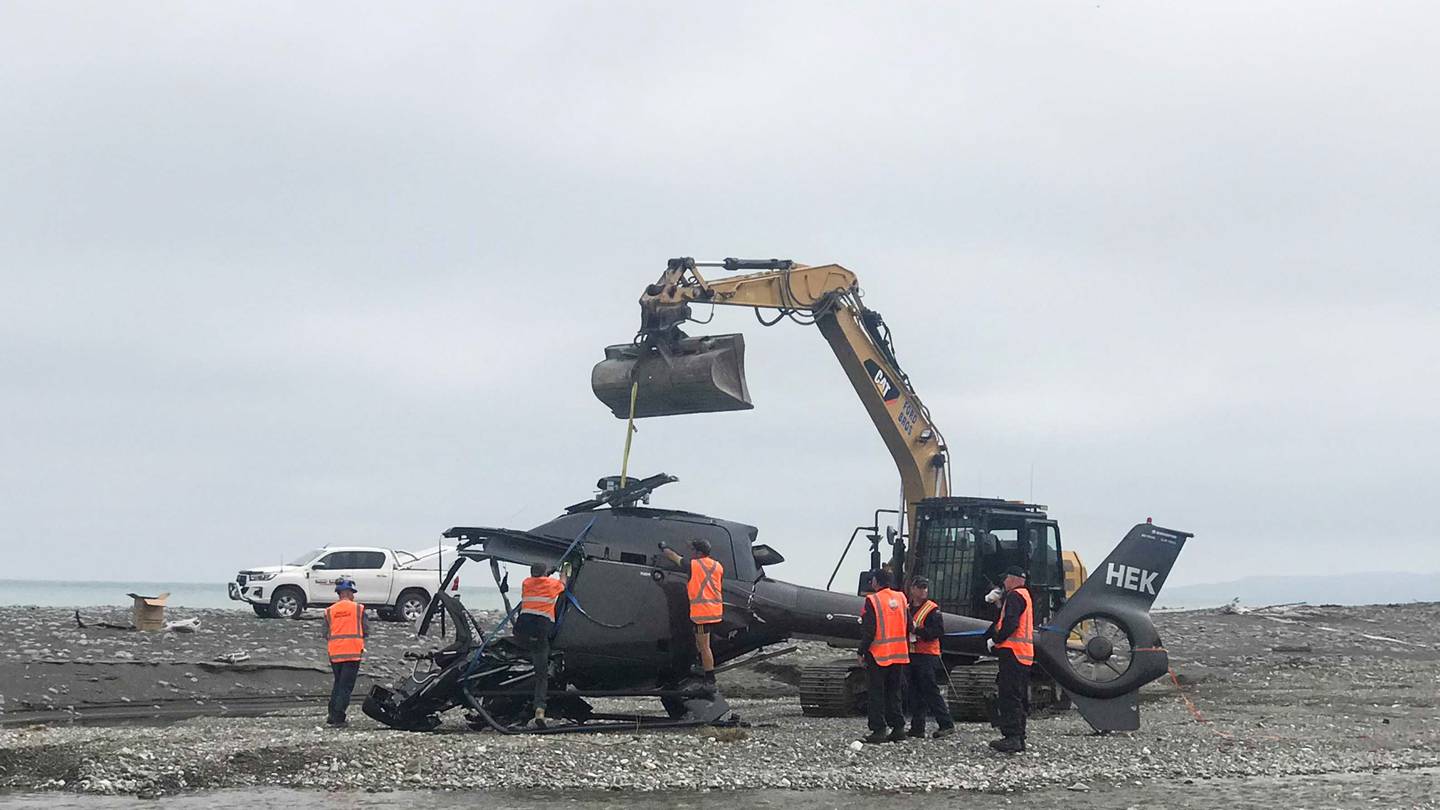 The wreckage of the helicopter is removed from Kēkerengū Beach. Photo: NZ Herald
The investigation into a helicopter crash that killed a North Canterbury couple and orphaned their young children may take up to two years to complete.

Andrew Hamish Davidson (60) and his wife Lin Chen (39) died when their helicopter crashed into the beach at Kēkerengū north of Kaikoura on December 15.

Their two children and another child survived the crash but were injured and pulled from the wreckage by locals who rushed to the scene.

Davidson was the pilot.

It is understood Davidson was flying his family and another child from his North Canterbury home to Kēkerengū Beach for lunch.

The spot is popular for helicopter pilots as they can land on the stone beach and passengers can enjoy lunch at a local cafe.

Witnesses said the crash happened about 12.40pm as Davidson came in to land - that the aircraft suddenly started to spin, then "nosedived".

"It started spinning ... then it just disappeared ... clunk ... bang. I thought, 'S**t, oh my God' - it just nosedived down and I thought, 'Crikey, they are going to need some help," said witness and rescuer Ian Mehrtens hours later.

"[The kids] were screaming in pain ... The older girl, she wasn't good.

The day after the crash investigators from the Transport Accident Investigation Commission examined the mangled wreckage before a recovery team arrived and removed the helicopter from the beach.

The investigation is ongoing and TAIC said it may take up to two years until questions are fully answered around the tragedy.

"There is no set time for TAIC inquiries – they take as long as is necessary for the Commission's investigators to gather all necessary evidence from numerous lines of inquiry, analyse it, produce and consult on a draft report, then a final report," said TAIC spokesman Simon Pleasants.

"TAIC's aviation investigations have been taking on average a year and a half to two years.

"Some take longer - the commission is thorough."

Pleasants said investigators would likely brief the commission next month - the first since the crash - on the scene examination and "associated health and safety considerations".

"They will discuss emerging lines of inquiry and potential focus areas to be considered as evidence gathering continues this year with interviews and collection of physical and documentary evidence."

He said the TAIC commissioners may consider the need for "urgent recommendations" or an interim report into the crash, as they had in some previous cases.

But at this stage that had not been planned or discussed.

Davidson and Chen were from Kaiapoi, north of Christchurch city. He had just taken ownership of the Eurocopter EC120B machine in October.

The businessman had set up the helicopter charter company Glenloch Helicopters Ltd a month earlier.