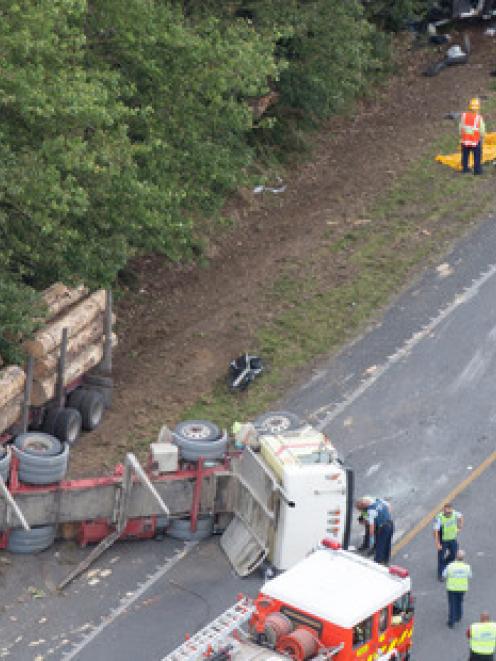 The crash scene on State Highway 1 near Waipu at Uretiti, north of Auckland. Photo / Brett Phibbs
Police have confirmed a crash on SH1 near Waipu that killed four people and critically injured an eight-year-old boy was a result of driver error.

Speaking at a press conference at Whangarei Police Station today, Northland road policing boss Murray Hodson said at about 1pm a north-bound vehicle on SH1 pulled to the left-hand side of the road and attempted to complete a U-turn in front of a north-bound fully-laden logging truck.

Four people in the car, two adults and two children, were killed, and an eight-year-old boy -- who had also been travelling in the car -- was critically injured.

The child was taken by helicopter to Whangarei Hospital.

The truck-driver was taken by ambulance to Whangarei Hospital with moderate injuries.

Mr Hodson said police were yet to contact the victim's extended family, but he confirmed they were of Asian descent.

"Police are currently working with emergency services to try and carry out the investigation in relation to this crash."

There were witnesses to the crash who had aided police with their investigation, Mr Hodson said. Some of them would be referred to Victim Support.

"This is a tragedy -- a catastrophic scene -- and there will be a number of people who will be affected by this incident.

He said it's important to remember that people do make mistakes. "This is the driver of the car making an error of judgement, but the consequences have been fatal."

A manager at the Department of Conservation's Uretiti Beach camp-site north of the crash scene said campers among the almost 200 people staying there were "quite shaken", although she was unaware of any who witnessed the carnage.

"It's a real tragedy,'' she said, adding that she was hoping for a safe exodus from the camp on January 2, when it traditionally emptied out after New Year's celebrations to make way for family groups.

The woman, who did not want to be named, said no large family was booked to stay at the camp tonight.

But she said that did not necessarily rule out the camp as an intended destination for the victims.

No traffic was being allowed to reach the camp from the south, but she said police were letting through vehicles heading to it from the north.