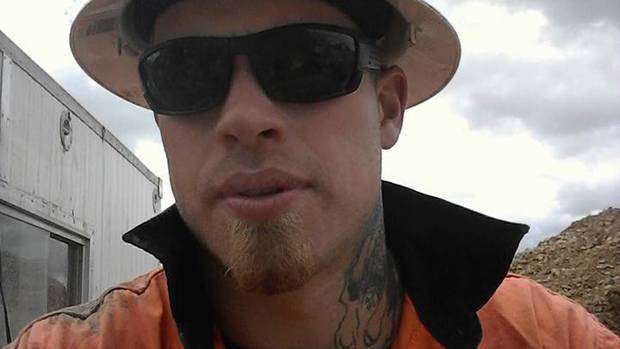 Shayne Heappey died from his injuries in hospital. Photo: Via NZME
A patched Nomads gangster drove a gang associate to a house where he was later stabbed to death over a debt, a court heard today.

Shayne George Heappey, 25, an associate of the Nomads' Christchurch chapter, was stabbed and cut 14 times during a brutal attack on December 8 last year.

In the days leading up to his grisly death, Heappey was accused of owing a person connected to the gang a small debt, the High Court in Christchurch heard this morning.

He allegedly ignored repeated requests to settle the debt and various gang members were out to find him.

In a text message to a senior gang figure, Heappey admitted having "let him down" and that he "collect his punishment".

At about 9.30pm on December 8 last year, Heappey got a text at his Bishopdale home from heavily-tattooed patched Nomads gang member Richard John Sim asking where he lived.

Heappey told 51-year-old Sim – who today pleaded guilty to a charge of causing grievous bodily harm with intent to injure - who headed around.

Sim then drove him to his Russley house, the summary of facts says, and then texted others in the gang.

"Got Smiley, get [a named gang member] here ASAP," Sim texted. A response told him to keep him there.

At about 10.50pm, two gang affiliates showed up, driven by a third person.

Heappey went outside where a fight broke out.

He was stabbed in the chest and arms and punched when he fell over, the court heard.

"Due to the injuries sustained by the victim he lost any ability to defend himself or physically respond to the attack," says the summary of facts.

After the attack, Heappey was bundled into a car by his assailants and driven to Christchurch Hospital.

Hospital staff took the bleeding Heappey out of the back seat before the driver took off, crashing into a parked car.

Although hospital staff tried to save his life, Heappey died from his injuries at the hospital.

He was stabbed and cut 14 times during the assault, with defensive injuries to his left arm and hand, one stab wound through his firearm, three stab wounds to his chest, and two penetrating his heart.

Later, Sim acknowledged to police officers that he had driven Heappey to his house.

But he denied that either Heappey or any other person was on his property at the time the fatal assault took place.

"Sim further stated that as much as he wanted to tell police what happened to the victim, he could not," the police summary of facts said.

Justice Pheroze Jagose remanded Sim in custody to be sentenced on September 18.

Four other people have been charged over Heappey's death, including two men charged with his murder who are due to stand trial next March.

Put gangsters away. The arrogant code says it all: 'would like to tell you everything, but can't'. They are subject to the Rule of Law, like everyone else.