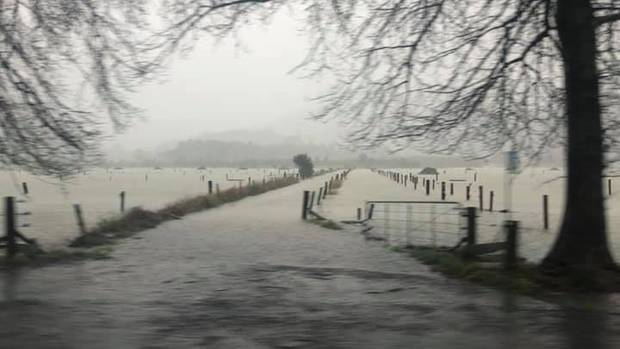 Hikuai is flooded as a result of the heavy downpour. Photo: Stacey Lee Clarke via NZ Herald
People are being asked to avoid non-urgent travel as the Kopu-Hikuai Rd along the State Highway 25 is closed until further notice due to flooding.

Police say there are currently there are no diversion via the Tairua area.

"The flooding is expected to rise due to high tides," a police spokeswoman said.

"The road will be closed for some time. Police ask that motorists avoid any non-urgent travel and amend travel plans accordingly."

Parts of Hikuai are underwater as floods ravage the Coromandel Peninsula and boats are being blown to shore in the wild weather hitting the North Island.

MetService has issued heavy rain warnings for much of the top half of the country today including Northland, the Coromandel Peninsula, Gisborne - north of Tolaga Bay - and the eastern ranges of Bay of Plenty.

People in those areas are being warned that heavy rain could lead to streams and rivers rising rapidly.

"Surface flooding and slips are also possible and driving conditions may be hazardous," MetService said.

Where has seen the most rain? Graphic shows 24 hour totals to 7am, from gauges and gauge-corrected-radar data. More rain to come for Coromandel and Bay of Plenty, and spreading into Gisborne. Rain eases for Northland this morning. https://t.co/qHyE5zhh6X ^TA pic.twitter.com/r2uk0MFkzd

Stacey Lee Clarke, a Hikuai resident, posted on the Coromandel Peninsula Road Status Facebook group saying "water is coming in fast with high tide not until a bit later".

Another poster, Sandra Morris, described Hikuai as being "underwater" as a result of the heavy rain.

On the Cooks Beach Community Facebook group, Penny Yates posted images of a boat being grounded at the beach.

"Sad to see this on front beach presumably from Flax Mill Bay," she said. "Looks like the anchor rope is snapped."

Motorists in parts of the North Island are being warned to drive carefully after heavy rain and wind downed trees and caused slips.

It comes as a deep low and associated fronts are expected to move south over the upper North Island during today.

MetService said the system was forecast to bring rain and strong east to northeast winds to much of northern New Zealand.

In the Coromandel-Thames district, there are slips and debris on Kopu-Hikuai and Tairua-Whitianga roads. Contractors are working to clear the damage.

High tide is expected at 3pm which could lead to further surface flooding.

In Waikato, a large tree had fallen on Manaia Road along State Highway 25, blocking both lanes of the highway. The road is closed and drivers are being asked to avoid the area.

MetService's heavy rain warning is in place until 6pm, and rain continues to fall across most of the North Island.

Whangarei had received the most rain in the past 24 hours, MetService said, reaching 87mm.

Despite more than 20 milimetres of rainfall overnight in parts of drought-stricken Northland, farmers say it is still not enough.

Northland Federated Farmers president John Blackwell said some areas had more rain which was long overdue but overall it would only make a slight difference.

The rain had come too late and the grass was the shortest it had been, which meant the financial impact would be felt for years to come, he said.