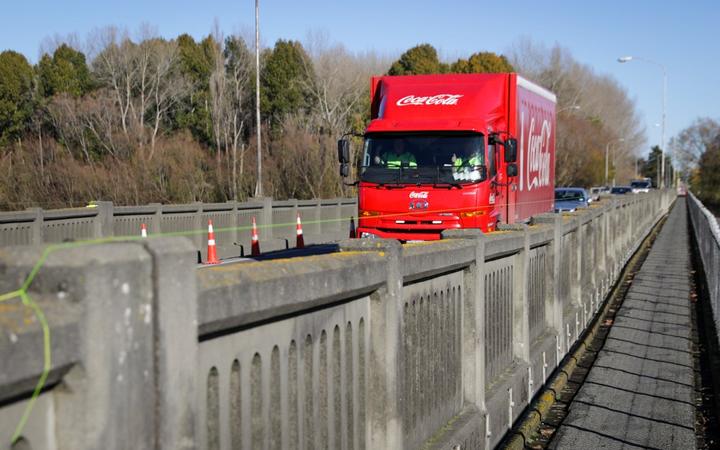 With the long weekend likely to put extra pressure on the 90-year-old bridge, the town's mayor said a second bridge could not come soon enough.

The critical State Highway 1 link was shut off to all vehicles after drivers noticed the bridge slumping, but after extensive testing the wheels are back rolling across it.

Heavy vehicles were given the green light at 10.15am to use the Ashburton bridge during daylight hours - between 7am and 7pm.

Instead, they have to use alternative routes heading towards the West Coast on local roads.

A 30kmh speed limit is also in place and the footpaths are open to cyclists and pedestrians.

This morning, engineers monitored the pier that had slumped because of the flooding as a digger removed debris beneath the bridge.

"Within about three days we have been able to get this key route working again. All of the key agencies worked together really strongly. Immediately the day after when this road was closed KiwiRail set up a special truck to go across the rail bridge to get medicines to the town... so everyone worked hard to keep the connectivity going and it's good we've got the bridge open again now," Wood said.

However, over the long weekend, that was expected to balloon to more than 30,000 vehicles a day, Ashburton Mayor Neil Brown said.

"The engineers have said it's good so you have to trust them. If they say it's okay, I am confident it is okay and it should hold the vehicles," Brown said.

Debris caught under the pier caused the bridge to drop 130mm on one side and 110mm on the other, Waka Kotahi Canterbury West Coast system manager Peter Connors said.

He wanted people to know "it hasn't moved since the flooding on Monday and that it was stable".

"We wouldn't be opening it if it wasn't. Although there is a lot of pressure to get a bridge like this open we don't take any risks with that. The bridge is perfectly safe. People should be assured that's the case."

There were two options on how to best secure the damaged pier but once they get a platform around it, NZTA would start working on it properly from next week once a decision is final, Connors said.

Brown was hopeful a second bridge could be fast-tracked if government funding was secured. He was delighted when Minister Wood confirmed talks were under way to help fund and build a second bridge, saying it had been well over a decade in the making.

"The only thing we haven't finalised is the last piece of funding for it and me talking to the minister today and him listening, we'll hopefully get that funding gap fixed. If we get the funding secured - yes we could bring the project forward, a year perhaps two," Brown said.

The Ashburton bridge will be monitored daily and further strengthened next week.