Heroic pilot: 'It was like a scene from Armageddon'

It was like a scene from Armageddon - grey, dusty and hard to breathe.

But heroic Rotorua pilot Tim Barrow from Volcanic Air Safaris says he would ignore the rules again in a heartbeat and land on a freshly erupted White Island if it meant saving lives.

It is thanks to the actions of Barrow and six other private helicopter company staff members that 10 people survived the horrific tragedy on Monday that killed at least six people. 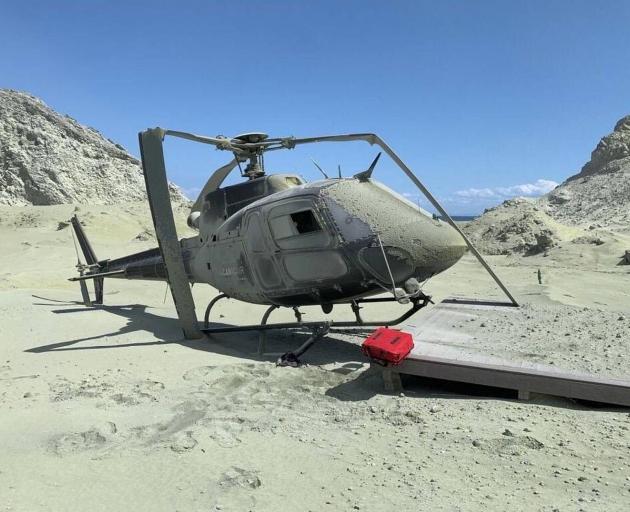 A Volcanic Air Safari helicopter. Photo: Supplied
But the word "hero" doesn't sit right with Barrow. He said he simply did what needed to be done, he knew the island well and assessed that, while there was a risk, it was one worth taking.

"My assessment was just to get in there and get the job done. My view was the island had done its thing, it had blown its top at that stage and if there was any opportunity to get those people out then we would try."

Barrow said fellow Volcanic Air Safaris pilot Brian De Pauw was on the island near the beach with tourists when the volcano erupted.

Barrow said De Pauw instructed his four German passengers to get in the water with him. Two did and as a result, they didn't suffer any injuries. But two chose to stay on the island and were severely burned.

About 10 minutes after the eruption, Barrow, who was at the Rotorua base, was radioed about the eruption. Barrow made the decision to get in his helicopter and fly to the scene, with crewman and fellow pilot Graeme Hopcroft.

Thanks to aerial communications set up by fellow pilot John Funnell, who was in a fixed-wing aircraft above the scene, Barrow was able to hear what had unfolded.

He knew Mark Law from Kahu had chosen to fly to the island to help in the rescue, despite emergency services at that stage being prevented from doing so. 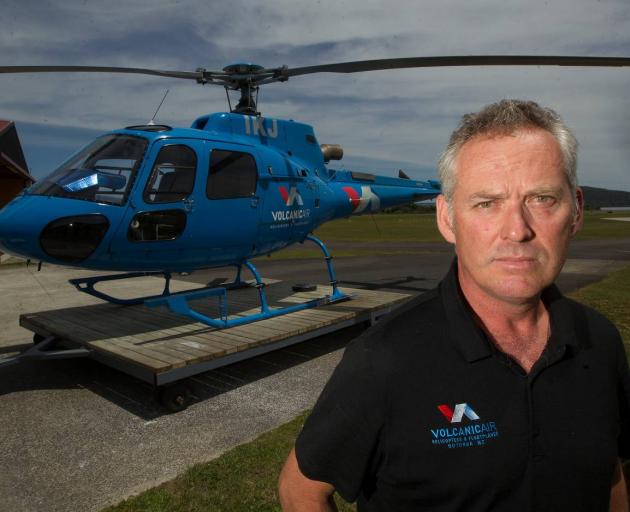 Chief pilot for Volcanic Air Safaris Tim Barrow. Photo: NZ Herald
Barrow said he made the call to join Law and his men to help.

"We did a reccy (reconnaissance) from above to assess the conditions ... Talking to Mark he assessed the conditions as well. I determined it a worthwhile risk to fly in and land on the crater floor.

"It was carnage when we got to the centre. It was steamy, it was quite hard to breathe. The gas masks were invaluable. Once we got into the centre of the crater, there were bodies and victims. There were injured in various states obviously in distress. The sole focus was to get those alive off the island."

Barrow was directed to one of the survivors who was in a pretty bad way. The person - Barrow was unsure if they were a man or woman - was burnt and covered in ash.

With help from Hopcroft, they carried the person on their shoulders to their helicopter before heading into the crater to get more survivors.

"There were a number of victims injured in close proximity."

Between the three men with the Kahu crew, Barrow, Hopcroft and two other Volcanic Air Safaris crew members that arrived shortly after - pilot Sam Jones and crewman Callum Milne - the seven men carried 12 survivors to three of their helicopters.

He said Jones and Milne did another "reccy" of the island to ensure there were no remaining survivors before heading back to Whakatāne.

Barrow said one of his two badly injured passengers died on the way to hospital and it was his understanding another passenger in a Kahu helicopter also died en route.

Barrow said he tried not to get emotional about what he had witnessed and the gravity of the event.

"We were on a mission, to be fair. The sole focus was to get back to the mainland because I knew our passengers were in a critical state."

Barrow said despite breaching Civil Aviation rules by landing on an area with volcanic activity, he wouldn't change his decision if faced with it again.

"When something like this is happening, as much as we are trying to be safe, we are not pulling the rule book out ... We knew there were lives at risk.

"I wanted to get out there and assess the conditions. I know that volcano pretty well. I have been operating there since the early 90s. My visual assessment was it was safe to land given the wind direction."

When asked how he felt about being a hero he said: "I'm pretty averse to that word. It's what you do. There were a team of guys all on the ground working together as a team."

He said while it was great they could save 10 lives, it was still devastating.

"It's the people that are left behind that's the hard part."

Barrow said he understood the emergency services decision to not go on the island and he would not criticise any individuals.

"They have processes they have to follow. I am not sure they are always the right ones. We assessed the risk for ourselves."

He said like Kahu, he had offered emergency services their help to retrieve the bodies in the coming days if needed as they had the knowledge of where they would be.

He said he couldn't speak more highly of his team and they were all now taking a breather and some time off.

"They were incredible. Some of them saw things they shouldn't have seen ... We are concerned for them, we are deeply concerned for the families of the victims and the survivors. Goes without saying really."

He said he was unsure what the company's future on the island would be and no doubt that would be well thought out.

Thankfully for Volcanic Air Safaris White Island tours was not the only part of the business, he said.

"We have a team here we want to continue to support. We are a part of the Rotorua tourism family. It is a great community and how that is moving forward we will see in the weeks and days to come."