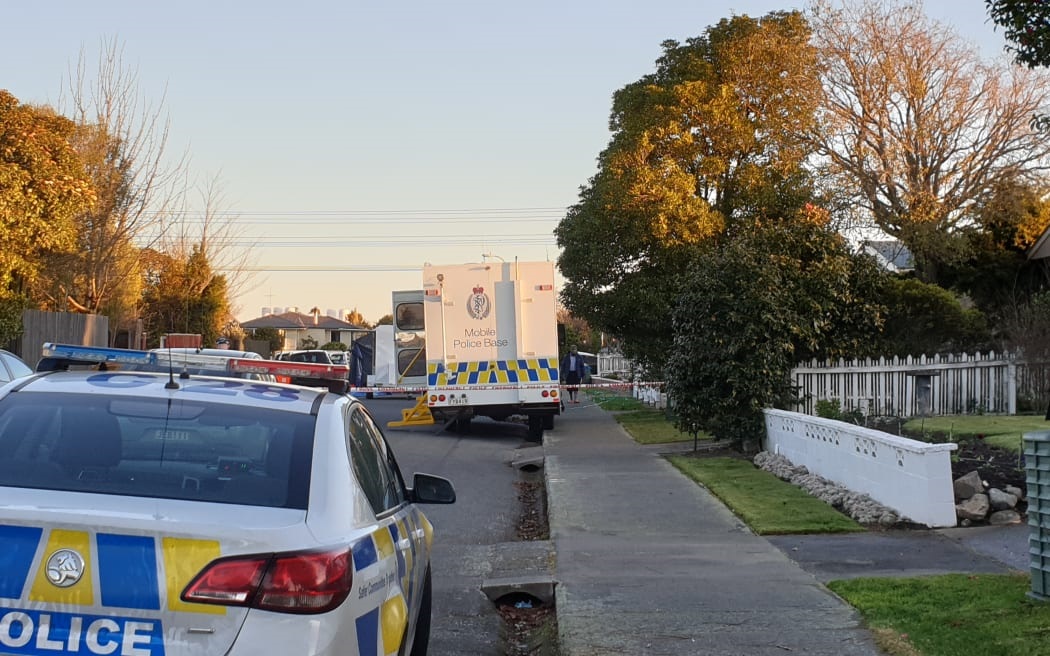 Police at the scene of the stabbing on Sunday. Photo: RNZ
Residents in a Christchurch suburb are considering moving houses after a woman was killed in a random stabbing at the weekend.

The woman had been walking from work to her home on Cheyenne Street in Sockburn when she was attacked with a knife by a 37-year-old man.

Emergency services were called to the scene at 4.20pm, and she died of her injuries shortly after.

Police have not yet released the name of the victim, but said she was in her 50s, and had a partner and children.

Superintendent John Price said the alleged offender did not know her.

"This was simply a horrific, traumatic, and random attack on an innocent person who was simply making her way home from work," he said.

The attacker is known to police, and is appearing in Christchurch District Court with a charge of murder today.

Dee Ram lives across the road from the scene, and is horrified something this awful could happen near her home of 17 years.

"Such a precious life has been taken away, that's very sad, and I feel very angry for the person who has done that. He had no right to do that."

She has lived there with her husband and children since they immigrated from India - but now feels so unsafe she might leave the neighbourhood.

"I don't think it is even safe for me or my husband or my children or anyone to go for a walk even. I used to go for a walk up to the dairy, and now I have to think three times before I take action."

A couple who did not want to be named live two doors down from the site of the stabbing, and did not hear any screaming on Saturday.

It took three police cars and two ambulances arriving for them to realise something had happened.

"It was only after the cops came that we actually knew what was happening, so we were just inside the house, and we didn't hear anything, that was quite odd."

"We didn't hear anyone screaming."

They are scared to let their children leave the house, and plan to drive them to school from now on.

Anne van Slooten (92) lives right next door, but she does not feel threatened by the attack.

"That is just an isolated case, somebody must've gone mad," she said.

Ram said the neighbourhood is tight-knit and supportive - most people have lived there for decades, and helped each other through the aftermath of the the earthquakes 11 years ago.

She said they would gather to process the horrific event - but for now, she just wants the cordons to come down so she can support the victim's whānau.

"We can't go to their house because of all the barricades and police to see how they are, because in our Indian custom, when something like that happens we'd go and give food."

Most of Cheyenne Street was blocked off on Saturday after the attack, and cordons remained in place for the surrounding houses on Sunday while a scene examination took place.

Supt Price said the examination would continue over coming days.