An inquiry is to be launched into allegations that elite New Zealand soldiers killed civilians in Afghanistan.

In launching the inquiry, Parker noted that he had seen video footage which did not corroborate key aspect of the Hit and Run book which prompted the investigation.

"The footage suggests that there was a group of armed individuals in the village."

However, the material Parker had seen did not conclusively answer some of the questions raised by the book.

"In light of that, and bearing in mind the need for the public to have confidence in the NZDF, I have decided in the public interest that an inquiry is warranted."

It will not have power to lay charges, but could recommend further action.

Operation Burnham is the name of the New Zealand Special Air Service (SAS) raid detailed in Nicky Hager and John Stephenson's book Hit and Run, which alleged six Afghan civilians were killed and 15 were injured in a SAS attack on two Afghan villages in 2010.

Camera footage from a helicopter used during SAS raids in Afghanistan has been cited by the Chief of Defence Force in a vigorous defence of New Zealand actions. Lieutenant General Tim Keating fronted media today and, standing before maps of the Tirgiran Valley area where the 2010 raids occurred, outlined the reasons why allegations by journalists Nicky Hager and Jon Stephenson are wrong.

Hager and Stephenson's book, released a year ago, alleged that the deaths were covered up the New Zealand Defence Force.

Prime Minister Jacinda Ardern asked Parker to look into the Hit and Run claims in February.

Her Labour Party had demanded an independent inquiry while in Opposition after the National-led Government refused to do so. 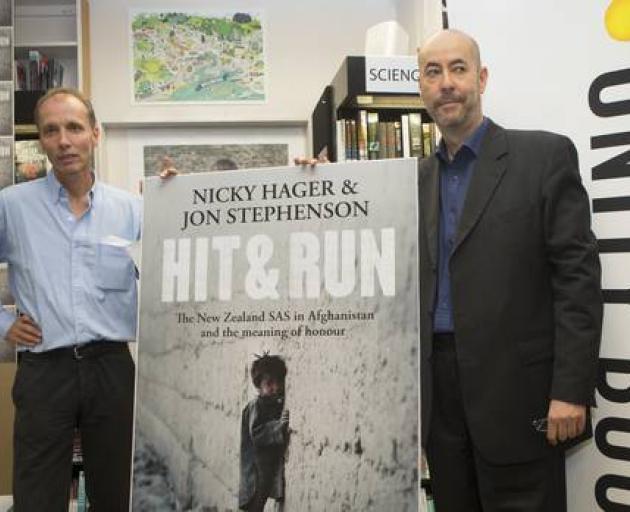 Authors Nicky Hager, left, and Jon Stephenson at the launch of their book, Hit & Run, in March last year.

The Defence Force rejected the allegations made in the book, though it later conceded that the authors were correct about the location of the raid after initially saying the NZDF had "never operated' in the villages.

Speaking to reporters at Parliament earlier today, National leader Simon Bridges said a new inquiry would be a waste of money.

"Ultimately spending millions and millions of dollars on what would be [Labour's] 73rd or 74th inquiry is unnecessary.

Bridges rejected the suggestion that those ministers were not completely independent, saying that they did not hold the portfolios at the time of the 2010 raid.