'It was all just falling around me' 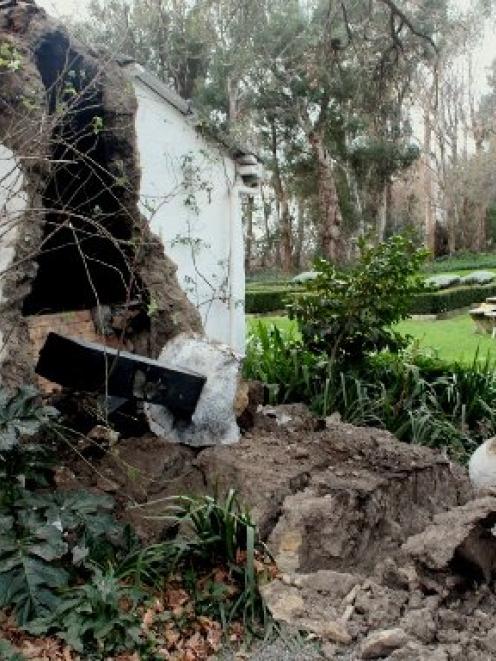 The cob walls of a Seddon house crumbled in yesterday's 6.6-magnitude quake. Photo by Bejon Haswell.
Laura-Jean Kerslake stood screaming for her infant son in the doorway of her Seddon home as the walls crumbled around her.

The 22-year-old was asleep when the quake struck, after working the late shift as a chef. She usually sleeps through quakes, but this one was much stronger than usual.

''It was just like a train coming through the place. Parts, flaky bits of the roof started falling on me.

"I couldn't hear my son and I was just standing, screaming in the doorway but it was all just falling around me.

''It was all coming down, giving way, so I tried to run outside but it was really hard to stand up because it was shaking so hard.''

As she sprinted out the front door of the house she shares with her parents, Nicola and Russell, one of the brick chimneys fell just metres from her.

Another chimney crashed on to the bed where she had been sleeping moments before.

Her mother was across the road with neighbours, and assured her everyone else was out of her house and her 19-month-old son, Quinn, was safe, being taken for a walk.

''It was absolutely terrifying. The sound was unreal. The aftershocks have been just as terrifying because we don't know whether it's going to be another big one or not,'' she said.

Nicola Kerslake said her home, an 1874 heritage cottage made of cob, was ''totalled''.

''The earthquake shifted the house backwards and forwards and it's just cracked all the way through like a pavlova.''

She said the cracks had split the walls of the cottage and ''you could put your arm through them''. Mr Kerslake, a builder, had already inspected the property and thought there was too much structural damage for it to be repaired.

There were hairline cracks in some of the walls after the 6.5-magnitude tremor on July 21.

''We've had quite a few aftershakes and I can see bits of cob coming out every time, so I think that's it for the house, unfortunately,'' Nicola Kerslake said.

''But everybody's safe and that's the main thing.''

She was visiting her neighbours and from their back garden, she could see pine trees dropping into the Awatere River as the quake caused a landslip.

While Marlborough bore the brunt of yesterday's earthquakes, which were felt from Auckland to Christchurch, there have been no reported deaths or significant injuries.

In central Wellington, thousands of residents tried to head home after the

shakes. The damage there is still being assessed but scientists have warned the tremors are likely to continue during the weekend.

For many in Seddon, the fear of those aftershocks was enough to make them flee their homes last night. A Red Cross centre was set up at the local school, giving residents a safe place to go if they did not want to stay at home.

Civil Defence said most houses in Seddon township had sustained some damage but the majority were still habitable.

Despite that, 22 residents were expected to spend last night at the emergency centre, with a further 11 arranging alternative accommodation elsewhere.

Two people reportedly required medical attention following the quakes but they were for medical issues that were not injuries.

Head of the local volunteer fire service Kieran Hebberd said the swarm of shakes was probably the worst the town had felt and most residents struggled to remain standing.

''There's houses that are falling down [and] roofs fallen down, chimneys fallen down,'' he said. Residents were ''sick of the earthquakes, but what can you do; you can't prevent it''.

They were instead making the most of their tight-knit community and supporting each other.

Peter Jerram, a councillor for the Wairau/Awatere ward, said there was a lot more obvious damage to buildings this time, including the hotel. The Seddon church was also severely damaged.

Many roads in the area, including State Highway 1, were closed last night as were bridges that had slumped.

''The great sadness is the knowledge that the rebuild, or repairs will take a long time, so people there, and probably in Ward as well, will need a lot of support, in terms of food, warmth for homes, and belief that their town can be lived in for the future,'' Mr Jerram said.

Marlborough District Council staff, including the mayor, will join Civil Defence team members in Seddon today to begin the job of assessing damage and any welfare needs.

Former Dunedin man Richard Ellwood was working as a cellar hand at Riverland's Mt Riley Winery when the walls began to shake and the pinot began to spill.

Mr Ellwood said he felt ''a little less than safe'' when the wine bottles were tossed off their shelves and the 20,000-litre wine tank became unstable.

Teacher Jade Lee, formerly of Dunedin, was in her classroom at Ward Primary School, near the epicentre in Seddon.

When the earthquake struck, the 20 children in the class and Miss Lee ducked under chairs and tables, avoiding a giant whiteboard that came off the wall, she said.

''Everything was coming off the shelves. The lights were the scariest thing - they were reaching the rooftop and coming back down again.''

Sue Lindsay, formerly of Central Otago, said it was the worst earthquake she had felt in the 25 years she had lived in Nelson. She was at home when the shaking started, and said it was accompanied by loud rumbling.

''Everything started to shake and the house started cracking as the windows and timbers started moving. I got to my knees on the floor and waited for it to finish ... it wasn't a sudden jerk. it was like a big rolling wave.''