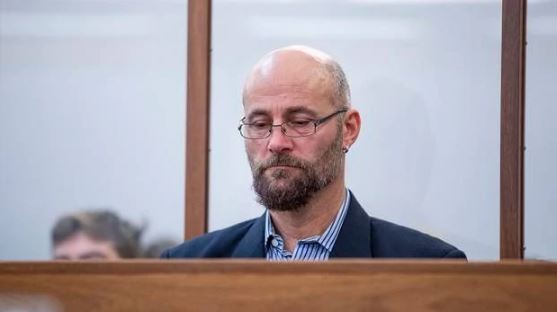 Nigel Edgecombe sits in the dock at Wellington District Court for sentencing. Photo: Pool
A former Wellington teacher who filmed nearly 100 showering women through a two-way mirror in his home has been sent to prison.

The women and girls he filmed have described the impact of his offending, with one girl saying she now showers in a bikini or clothes, with the bathroom mirrors covered.

Some of the recordings were of girls aged 12-14 years old.

Nigel Colin Edgecombe, 52, who earlier pleaded guilty in the Wellington District Court to 49 counts of making intimate visual recordings and five charges of making an objectionable publication, addressed his victims today, saying he was "horrified" by himself.

'Is nothing sacred anymore?'

One woman read her impact statement to the court, saying the offending had corroded her trust in all people, and her trust in her own senses.

"I have torn people, if not places, apart, suspecting everyone and anyone could be doing the same and filming me," she said.

"Any and every crevice, light, mirror, held the possibility that someone was lurking behind it, watching me.

"What have we come to that I cannot even trust a friend in his family home to not take something from me?

"Is nothing sacred anymore? Even a trip to the toilet?"

She asked Edgecombe to look at her as she read the final lines of her statement.

"There's something there unhealed for you and you are spreading it out into the world like a disease - well I don't want it. Take care of it. Heal yourself."

A 17-year-old girl also read out her statement.

"It was so hard having to go to the police station and see myself naked on the screen in [his] shower when I was only 13-years-old," she said.

She said she often now showered with the mirrors covered and with her clothes or togs on.

"You hurt me in a way that is not forgivable. You took something away from me that I may never get back, and that is my trust."

Another victim described the offending as "vile", while another said she struggled to look at her own teacher at school, and would often throw up before class.

Edgecombe: 'I needed to be punished'

Edgecombe also addressed his victims, who were packed into the public gallery of the courtroom.

"To say sorry seems pathetic and I know most of you won't believe me anyway," he said through tears.

Even five or six months ago, he did not understand that his actions were "damaging people", and it was only once the victim impact statements arrived that he realised the harm he'd caused.

"I knew I needed to be punished, I knew I had hurt people.

Edgecombe apologised to the victims and said he would try to do everything possible to make sure he never offended in this way again.

His crimes were discovered when a 29-year-old woman staying at his home through a homestay arrangement found the two-way mirror and a digital camera in a wall cavity and contacted police.

An investigation revealed hundreds of videos and images of 90 women showering, changing, and using the bathroom, ranging from late 2013 to mid 2018.

The victims ranged from family friends to students and overseas visitors.

Judge Ian Mill said it was clear Edgecombe was a "supreme manipulator".

"You gave an impression of being an empathetic person, but that was a sham."

Judge Mill found it strange Edgecombe had not appreciated the impact on the victims until later in the court process, with the words "victimless crime" being used in defence submissions at an earlier date.

He convicted him and sentenced him to two years and nine months in prison.

Edgecombe has had name suppression until this point, but Judge Mill lifted it today.