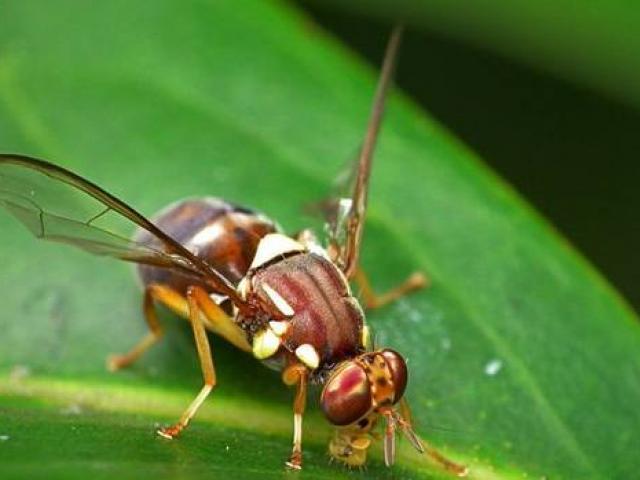 A large operation is under way today in the Auckland suburb of Devonport to tackle the discovery of a Queensland fruit fly on Thursday.

So far, no further signs of fruit flies have been found, but action is stepping up against the risk to the country's fruit and vegetable crops and horticultural exports valued at $6 billion.

Biosecurity New Zealand has started increasing the number of traps to 150 within 200m of where the fruit fly was found. Further traps will be added in a 1.5km radius from the find.

In a statement, Biosecurity NZ said if fruit flies are present, the traps will catch them.

The goal is to determine if the fruit fly is a solitary find or part of an incursion in the area. If a population is found, work will progress to eradicate it.

A field crew of 35 people are visiting local properties, checking for fruit trees, vegetable gardens and compost facilities that could provide a habitat for fruit flies.

Fruit and vegetable samples are also being taken from home gardens to check for fruit fly contamination.

More than 20 Biosecurity NZ staff from Wellington have arrived in Auckland to help and a mobile field laboratory is being set up at the Devonport Naval Base.

A legal "Controlled Area" has been declared over the suburb, restricting the movement of certain fruit and vegetables. Full details of the Controlled Area and movement controls is at: www.biosecurity.govt.nz/fruitfully

Biosecurity New Zealand yesterday imposed a ban on taking fresh fruit and vegetables outside an area around Devonport.

The area covers Devonport, Cheltenham and part of Stanley Point.

In a small area around Devonport village, no whole fresh fruit and vegetables, except leafy vegetables and root vegetables, can be moved outside the Zone A area. This applies to all produce regardless of where it was purchased or grown.

In the wider Zone B area, the restrictions only apply to fruit and vegetables grown within the zone.

Biosecurity NZ spokeswoman Dr Catherine Duthie said it is likely the restrictions will be in place for at least a few weeks.

Duthie said the Queensland fruit fly has been detected six times before in northern New Zealand – in Whangārei and in Auckland.

"Of these detections, only one, in Auckland in 2015, turned out to be a part of a wider breeding population and this was successfully eradicated by Biosecurity NZ."

However, the Ministry for Primary Industries said at the time the money was well spent given the risk the flies pose to the country's horticulture exports, which are forecast to rise 12 per cent this year to $6 billion.

The MPI has a network of about 7500 fruit fly traps across the country.

Biosecurity NZ said it was working with international trading partners and partners in the horticultural industry to minimise the risk.

The most likely way that fruit flies can arrive in New Zealand is in fresh fruit and vegetables.

To reduce the risk there are regulations governing the commercial import of fresh fruit and vegetables, while air and sea passengers are not allowed to bring them into the country.