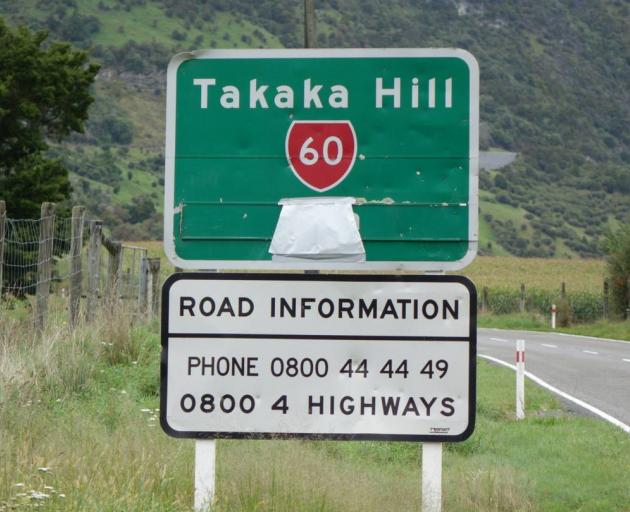 The driver who caused a crash on State Highway 60 between Takaka and Collingwood is still suffering a year on. Photo / Tracy Neal
A meter reader who caused a serious crash with a courier driver is still struggling a year on with the guilt, remorse and lingering injuries.

Neil Walker initially told police that if the other driver had not been overtaking him the accident wouldn't have happened, but has since taken full responsibility for the split-second decision which had serious consequences.

He was sentenced today on a charge of careless use of a vehicle, a year after the accident.

On May 17 last year Walker was driving between properties in rural Golden Bay, in his job as a meter reader.

Later that afternoon, while between properties, he had been parked waiting on the left-hand side of State Highway 60 between Takaka and Collingwood, intending to cross the highway to a property opposite.

The driver of a bright yellow and red courier vehicle approached on the 100km/h highway, saw Walker's vehicle on the left, so switched on his right indicator to overtake.

Walker then suddenly pulled out across the road in front of him, aiming for the driveway opposite.

The police summary said the courier driver sounded his horn and tried to brake but did not have time to react to Walker's sudden turn, straight across the road in front of him.

The front of the courier driver's vehicle hit the side of Walker's vehicle causing what were described as "life-changing injuries" to each driver and extensive damage to both vehicles.

The courier driver suffered severe neck, back, shoulder and knee injuries which had caused ongoing pain. By the end of February this year he had still not returned to work, police said.

Walker was said to have permanent disabilities to both shoulders and it was a long time before he could walk again, following the crash. He also continued to suffer mental anguish over what he had inflicted on someone else, which "weighed heavily on his conscience".

He had recently returned to his job as a meter reader, for an annual salary of $35,000 which the court heard was a reason his ability to pay substantial reparation was limited, and also why a driving disqualification would further harm him.

In the Nelson District Court today, Walker who was still nursing injuries, sat in the public gallery, clutching hold of his wife's hand as he was sentenced.

Judge Jo Rielly said he was aware he was guilty of a "serious error of judgement" made in the heat of the moment.

She said in sentencing that she was saddened to hear of the extent to which Walker had suffered emotionally, as a result of a split-second decision many drivers made.

"I sense your remorse is genuine, and even to this day you suffer mental anguish."

She said it was clear that if Walker was able to carry out a community work sentence, he would, but he was a mature person and such a sentence would mean he would struggle to fulfil his work obligations.

Judge Rielly said while reparation would go some way to acknowledging the harm caused, she couldn't compensate the other driver for what he had suffered, including the fact his injuries meant he had been unable to take part in the sports activities he enjoyed.

Walker was ordered to pay $2500 reparation with $500 to be paid before July 1, and $50 a week thereafter. He was also disqualified from driving for eight months, back-dated to April, which meant he was now able to apply for a limited licence.