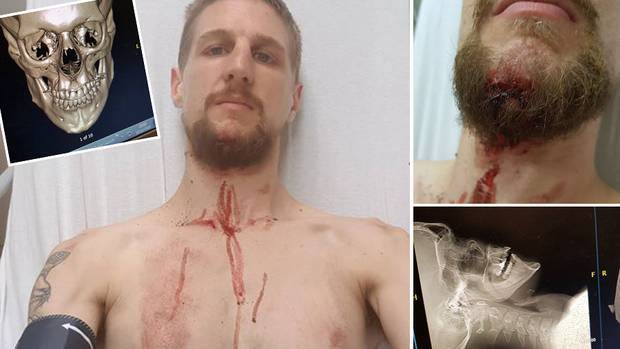 Both men shared their experiences in reaction to the New Zealand Herald's story on Auckland man Liam Thompson (27), who is suffering from a broken jaw and a range of cuts and grazes after his Lime scooter locked up mid-ride, throwing him over the handlebars.

Auckland based senior software architect and Lime rider Robert King tweeted to the Herald morning, "mine locked up yesterday at about 40km/h. Luckily, I didn't come off but did a pretty decent drift."

Lime scooters have a top speed of 27km/h on the flat, but can gain greater velocity downhill. A drift is when a vehicle skids sideways with locked wheels.

And Punakaiki Fund manager Lance Wiggs said, "This lock-up happened to one of our folks going down Queen St - they managed to land safely."

The member of Wiggs' team concerned, investment analyst James Pope (26), told the Herald he was travelling down Queen St on a Lime scooter, going "in the high twenties" when "I started breaking a little bit then the front wheel totally locked up and I went flying over the handle bars."

He was left with sore legs and an aching backside. "I was definitely lucky not to be seriously hurt," he says.

Pope contacted Lime immediately after the February 13 incident, then followed up with another message the next day. Lime did not reply to either communication.

Ironically, Wiggs was one of those who sounded a safety warning when Lime launched in New Zealand in mid-October, telling the Herald, "Someone is going to die if we don't see changes."

While the worst has not happened, so far, there have been numerous serious incidents, including Otago student Renee Whitehouse, who had to have part of her skull reattached after her Lime collided with a truck (earning a $100 fine from Lime for leaving her scooter in the wrong place in the process) and broadcaster Tim Wilson, who shattered his kneecap in eight places.

ACC now says it has paid out more than $560,000 after receiving 1263 injury claims since Lime launched in New Zealand, from sprains to broken bones, dental injuries and concussions. Lime says it's open to a per-ride levy, part of which could go toward ACC.

Lime is on a trial mobile trading licence in Auckland, which expires on March 31. The council is considering putting conditions on a permanent licence, such as a speed limit in certain areas or compulsory helmets - but both would require a law change.

The Auckland lockups follow a spate of reports of lockups in Zurich in mid-January, which saw Lime temporarily pull its scooters from Swiss streets.

She added, "While the issue is still under investigation, the affected scooters have been removed from circulation. In the meantime, we are in the process of rolling out early detection and additional preventative measures for our global fleet. User safety is our first priority and we appreciate customer patience during any delays in scooter availability."

Thompson, who has written to Lime but hadn't heard back, said his Lime-ing days were over - but he still wanted an explanation.

A Lime Spokesperson can indeed say, 'User safety is our first priority and we appreciate customer patience during any delays in scooter availability,' but it appears customer patience is also required in relation to this company replying to legitimate safety questions put to them by two of their clients after defects have caused injury. Add the fact that the company were already aware of problems in Switzerland and clearly 'user safety' comes a long way down the priorities list at Lime. I'm not against electric scooter hire, believing that they could offer many benefits to urban transport solutions but this company clearly falls short of what is required to provide a reliable and safe service.