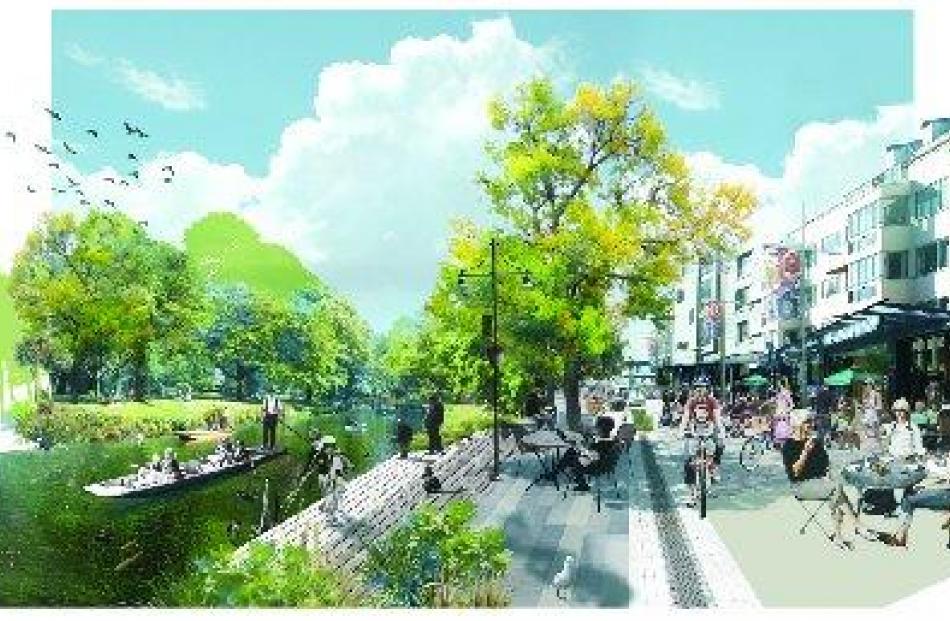 Tall buildings will be done away with and risky riverside areas kept free of development in an ambitious new $2 billion vision for the new Christchurch city centre.

The draft Central City Plan adopted yesterday proposes a host of new developments and financial incentives to encourage businesses and residents to shift back into the central city area that suffered so heavily in the recent earthquakes.

But critics are questioning whether the city can afford such grand projects when so many Christchurch people are still in need.

Much of the city centre's existing fabric is being torn down because of quake damage, and Christchurch Mayor Bob Parker said it presented a rare opportunity to create a world-class city centre.

"We would all rather [the earthquakes] hadn't happened, but this is a chance to seize the moment. I don't think many cities around the world have ever had this opportunity."

The plan calls for the creation of a "safe, sustainable, high-tech, low-rise city in a garden", with an emphasis on a smaller central business district, plenty of green space and a $406 million light rail system that will connect the city centre to the University of Canterbury in the city's northwest suburbs.

Christchurch-based MP and former mayoral hopeful Jim Anderton said the devil was always in the detail. He said he found it hard to believe a city the size of Christchurch, with a smaller CBD, could afford light rail.

"I have seen these light rail systems around the world, and they sometimes bankrupt cities," Mr Anderton said.

"It's not just grand ideas - there's got to be some reality to how you are going to fund them."

Mr Parker said the estimated $1.9 billion for projects outlined in the plan would be covered by reprioritised local funds, insurance, subsidies and borrowing, and the Christchurch City Council would be seeking contributions from the Government.

Engineers have concluded most of the land in the central city is safe to rebuild on, but liquefaction-prone areas closest to the Avon River - which runs through the city centre - will not be built on.

The smaller CBD would be characterised by new low-rise buildings no greater than six or seven storeys. Most of the deaths in the February quake were in multi-storey buildings.

"Our people have told us very clearly 'we don't want to go into those tall buildings anymore'," Mr Parker said.

"They don't have a place in our city." To encourage businesses and residents to make the city centre their home, the council has proposed a series of grants and rebates.

Residents could be offered financial assistance to reduce the deposit required for a house in the area, while the council may underwrite loans for businesses and provide grants per employee for a business that agrees to set up in the central city.

The council also proposed doing away with the requirements of school zoning for families who chose to live in the city centre, so proximity to schools of their choice was not a barrier.

"It may be harder to achieve, but you can see the logic in it," Mr Parker said.

The public will get to have its say on the draft Central City Plan before it goes to the Government for consideration by Christmas.

Mr Parker said he doubted every idea in the plan would get "universal acceptance" from the people of Christchurch.

• New smaller, low-rise CBD, with buildings no taller than six or seven storeys and reduced speed limits.
• Light rail linking the city centre with the University of Canterbury, costing about $406 million.
• An $8 million memorial to the 181 people who died in the February 22 quake.
• A new central city library.
• A major new metro sports hub and aquatic facility.
• A redeveloped Christchurch Hospital.
• Development set back 25m-30m from the Avon River, with green riverside corridors.
• More green space in Cathedral Square and more neighbourhood parks.
• One-way streets converted to two-way streets.