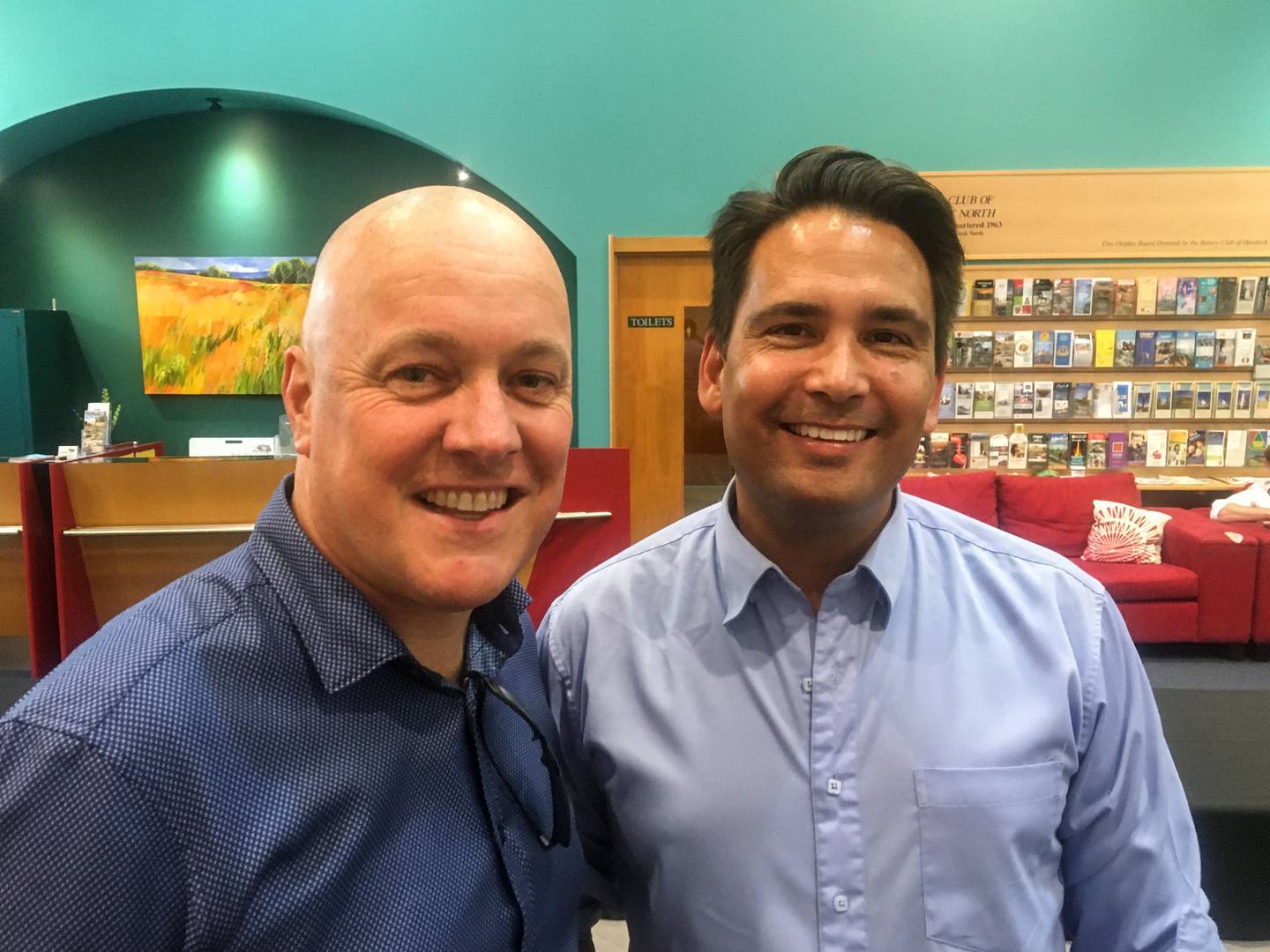 Christopher Luxon (L) and Simon Bridges are taking the party's leadership contest down to the wire. Photo: NZ Herald
Time is running out for a deal to be brokered between the two contenders for the National Party leadership before MPs elect the new leader at the caucus meeting scheduled for 3pm today.

As of Monday night, former leader Simon Bridges appeared to have no intention of caving, believing it was still not a clear-cut win for rookie MP and experienced chief executive Christopher Luxon.

Speaking to the Bay of Plenty Times at the delayed launch of his book in Tauranga on Monday evening, Bridges said "these things are always close" and but said the party would unify after the vote "one way or the other".

Bridges said he was contesting the leadership because of his experience "and view of where we should be going as a country".

National sources reported Luxon, running with Nicola Willis as his likely deputy, had more support than Bridges, although the exact numbers were not known.

Bridges' camp believed it was still too close to cede defeat, with some MPs wavering and about five or six said to be still in question.

While Luxon's side seemed confident, they were not 100 percent certain it was in the bag. The vote is a secret ballot and MPs do not always vote as they promised.

The wider party is keen for a deal between the two men, which would allow caucus to effectively anoint the new leadership team on Tuesday. But an MP told The New Zealand Herald many in caucus now expected no deal would be struck, and the vote would be contested.

Sir John Key has made it clear he supports Luxon and is understood to be among those who have tried to convince Bridges to fold and cut a deal with Luxon.

However, some MPs were displeased that details of Key's calls had leaked to the media. At least one MP was concerned about Key, a former leader, injecting himself into the current caucus in violation of a convention which holds that former leaders should generally stay out of caucus disputes.

Key gave his support to Luxon in three phone calls to MPs during the weekend, two of which were return calls to MPs seeking his counsel, and one which was made proactively.

Just which MP was the recipient of this call, and why Key felt the need to call them is not yet clear.

But MPs do agree with Key's preference for a deal, hoping the leadership would be stitched up behind closed doors over the weekend, allowing the notionally unified caucus to anoint the winner with no challenge on Tuesday afternoon.

But camp Bridges, despite being aware they're behind on numbers, does not appear to want to give in.

This appears to leave just two possibilities: a last-minute deal between the two parties late on Monday or on Tuesday, or the two candidates taking the contest to a vote in caucus.

A vote could be disastrous for one of the parties, given the strong feeling in caucus for unity.

If a candidate is defeated in an embarrassing landslide, there's a good chance no one will ever know - only the party whips, who count the vote, know the margin.

This gives Bridges some incentive to roll the dice and take the race to a vote, if he thinks his odds are remotely good enough.