Until now, the quantity of methamphetamine was the most significant factor in setting a starting point for sentences. Photo: NZ Herlad
New Zealand's meth crisis is starkly outlined in a new Court of Appeal judgment which seeks to hold accountable those making millions of dollars from methamphetamine, but keep addicts out of prison.

Meth dealers who can prove their own addiction caused their drug offending could have their sentences cut by 30 per cent, according to a landmark judgment released by the Court of Appeal today.

The role of an offender in a drug network will also have a greater bearing on the length of a prison sentence, or if they are jailed at all.

Until now, the quantity of methamphetamine was the most significant factor in setting a starting point for sentences.

While the weight of the Class-A drug will still be important in sentencing, judges now have more discretion to take into account whether the individual is a kingpin making millions of dollars, or simply a street dealer.

Poverty and deprivation of a drug dealer are now to be considered as potential mitigating factors, while lawyers and judges have been urged to take advantage of a little-known legal clause to postpone sentencing hearings so offenders can attend rehabilitation programmes and possibly avoid jail.

These are the most significant changes in a major shake-up of prison sentences for methamphetamine crimes in New Zealand, outlined in a comprehensive judgment released today by a full panel of five Court of Appeal justices.

The Zhang ruling replaces an earlier decision by the Court of Appeal, Fatu, which has guided methamphetamine sentencing hearings since 2005.

The new judgment comes six months after a two-day hearing in Wellington where the court invited evidence and legal arguments over whether Fatu had led to disproportionately harsh sentences for methamphetamine crimes, which carry a maximum penalty of life imprisonment.

The full panel of five justices, headed by the president of the Court of Appeal Justice Stephen Kos, focused on three key issues: the weight given to the role of the offender, personal circumstances such as addiction, and the approach taken to minimum periods of imprisonment.

The Court of Appeal also considered the link between methamphetamine offending and addiction, and whether longer prison sentences had any impact on whether someone became involved in drug dealing.

"If we think we can punish our way out of this, we're deluding ourselves," said Marc Corlett, QC, who represented two of the six appeal cases being heard together.

Since 2005, the weight of the Class-A drug has been the most important factor in sentencing individuals convicted of manufacturing, importing or supplying methamphetamine.

Depending on the quantity of methamphetamine, the guideline judgment established four bands – ranges with an upper and lower limit - of prison sentences.

Anything over 500g of methamphetamine is considered to be in the most serious Fatu band, with a minimum starting point of 10 years in prison and a maximum of life.

Only once someone is placed into one of the four bands is an individual's role - whether a lowly drug "mule" or kingpin at the top of the criminal organisation - taken into account by the judge.

Under Fatu, these personal circumstances can move a defendant with the upper and lower limits of the band - but significantly not between bands.

That will change under the Zhang ruling.

The Court of Appeal decided to keep the bands but, perhaps most significantly, sentencing judges can consider the criminal culpability of an offender, alongside the quantity of methamphetamine.

"We confirm that the role played by the offender is an important consideration in fixing culpability ... it means that a more limited measure of engagement in criminal dealing deserves a less severe sentence than a significant or leading role," wrote Justice Kos.

"Role may result in an offender moving not only within a band - as currently happens or is supposed to happen under Fatur - but also between bands."

In light of the astronomical increase in the size of methamphetamine shipments since Fatu in 2005, the Zhang decision also has changed the band structure.

Band Four, which was required to cover quantities ranging between 500g and 500kg, following Operation Frontia in 2016, was now too broad.

The Court of Appeal created a new Band Five for quantities of more than 2kg - which has a starting point of 10 years - as well as making lowering the sentences and weight ranges for Band One to Band Four. 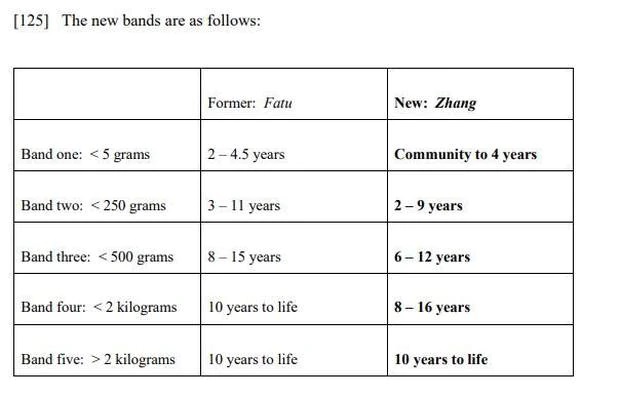 Significantly, the Court of Appeal said changed Band One so that someone could have a community based sentence such as Home Detention, or community work.

The Zhang ruling said judges "must be more willing" to set a starting point below what Fatu prescribed when the offender's culpability was low.

"We are particularly concerned at the need to consider more flexible solutions in Band One, where community-based sentences need to be a starting point open to the court, not merely an end point."

Under Zhang, once a starting point has been set by weight and the offender's role, the sentencing judge can reduce - or increase - the final sentence because of mitigating or aggravating features.

This was because the expert evidence by health professors and the police showed drug addiction called into question the effectiveness of long prison sentences as a deterrent.

Similarly, the Court of Appeal pointed out a little-used clause in the Sentencing Act "tailored" for drug dealers whose crimes have been caused by drug addiction.

Under Section 25 of the law, judges can adjourn a sentencing hearing so the offender can undertake a rehabilitation programme and this can be taken into account.

"The clear intent was to encourage participation in rehabilitation programmes which if successfully completed could ... mean a custodial sentence was likely to be avoided.

"It appears from our own review of the case law and the information given to us by counsel that Section 25 is used relatively infrequently."

The Court of Appeal urged lawyers and judges to make greater use of the adjournment powers in appropriate cases.

The new Zhang guideline judgment will be in force from today, regardless of when the offending took place.

The landmark judgment comes shortly after the Herald revealed more methamphetamine has been seized in New Zealand so far this year than any other.

With just over three months left of 2019, investigators from Customs have already stopped 1087kg of the Class-A drug at the border.

Wow. That's great news. I'm sure the new approach of not punishing offenders will stop offending.
"If we think we can punish our way out of this, we're deluding ourselves," said Marc Corlett, QC, who represented two of the six appeal cases being heard together.
I am also sure that approaching the issue from offenders appeals regarding how victimized they feel, is the perfect place to start.
Oh my goodness !!! That's the sixth flying pig I've seen today !!!!
How the climate has changed !!!!

Duress. As reported in the ODT, a woman owing money for deals was coerced by a gang to sell.