Angela Blackmoore was 21 when she was killed. Photo: supplied
A man has pleaded guilty to beating a Christchurch mother to death 24 years ago.

Jeremy Powell (45) appeared at the High Court in Christchurch this morning.

He has admitted to killing 21-year-old Angela Blackmoore in 1995 - as her two-year-old son slept in the next room.

A woman in her forties is also appearing in the High Court today in relation to the case.

The courtroom was packed with Blackmoore's friends and family members - including her partner Laurie Anderson.

There were gasps when Powell announced his plea.

In the summary of facts, the court heard Powell turned up to the victim's house with a bat and a large knife hidden in his trench coat.

Powell then admitted beating Blackmoore over the head with the bat until she was dead. The woman suffered 39 wounds to her head and neck.

He will be sentenced on April 1.

Meanwhile, a trial date has been set for his co-accused.

The 47-year-old woman, who has interim name suppression, has previously pleaded not guilty.

Her seven-week trial will begin on February 15 next year. 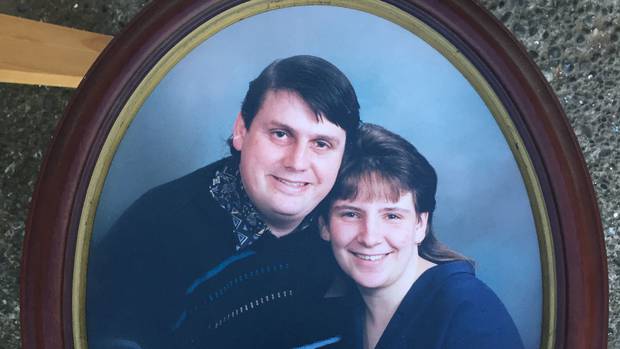 Angela Blackmoore with partner Laurie Anderson in a photo taken a week before her death in 1995. Photo: NZ Herald
Outside court, Laurie Anderson told Newstalk ZB he was "ecstatic" about the guilty plea because it had brought the case a year ahead.

He said the guilty plea was the "first step" with more to come.

Anderson thanked Detective Sergeant Todd Hamilton for his work on the case and said he did a "fantastic job".

"He's been on it from day dot and carried it through."