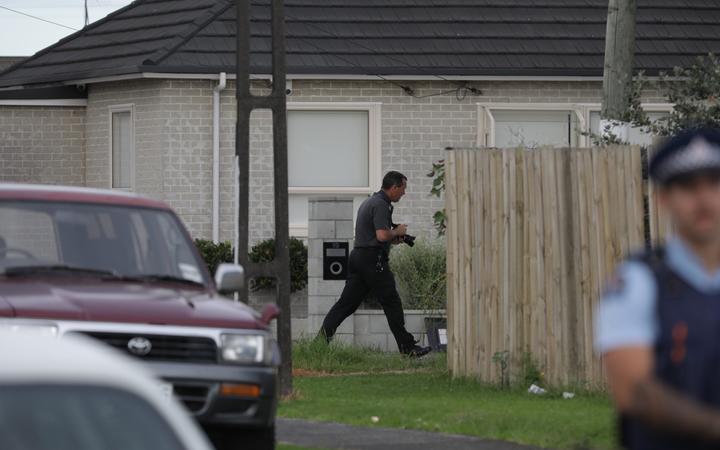 Police were called to a house in Avis Avenue about 5.40pm yesterday. Photo: RNZ
A man who died last night after a shooting incident in Papatoetoe was shot by police three times.

He was Tangaru-Noere Turia, aged 34.

Police were called to a house in Avis Avenue about 5.40pm yesterday after a shot was fired through the window of a neighbouring home.

Counties Manukau District Commander Superintendent Jill Rogers said a member of the public called police and said they could see a man with a firearm.

Police, including Armed Offenders Squads and the Eagle helicopter, were deployed.

She said police had made attempts to negotiate with the 34-year-old man for a number of hours in order resolve the matter safely.

"At about 8.24pm, the man came out of the house with a shotgun, police repeatedly asked him to drop the firearm and he failed to do so."

She said the man's behaviour continued to be erratic.

"He was then shot by police."

The man was shot three times, she said.

St John staff immediately administered advanced first aid before the man was transported to Middlemore Hospital for surgery, where he died about 10.30pm, Superintendent Rogers said.

Several people were in the neighbouring house at the time of the incident. The man was not known to them.

The man was known to police and had active charges against him, Rogers said.

People living near the scene of the shooting said nothing like this had ever happened before in the neighbourhood.

Sandy told RNZ that she was feeling pretty shaken by last night's events.

"When I came home I did hear a big bang but I thought it was somebody's tires," she said.

"Later on I heard loud screaming, yelling, and then three gunshots as well... I was quite shaken and inside the home and in lockdown till evening."

She was frightened and concerned that someone dangerous could be out in the neighbourhood.

Another woman said she knew something serious was going on when she heard all the police cars coming down the street.

Evaloni was home with her children when it happened and was shocked when she came outside last night and discovered her house was inside the cordon.

She heard the police helicopter and sirens, but didn't hear any gunshots.

Poko wasn't home last night when it happened, but she said she got a call from her husband about it and he was quite shaken.

Formal identification still needs to take place but Rogers said the man's family and police staff were being supported.

"Serious incidents such as this are really upsetting for all involved.

"As we've said before this really is a worst-case scenario for our staff who unfortunately were put into a position last night where they have had to use lethal force to ensure not only their safety but the safety of the wider community.

"We now also have a family who have lost a loved one and so we will do what we can to ensure they are well supported along with Victim Support."

A critical incident investigation has been launched and the IPCA notified.