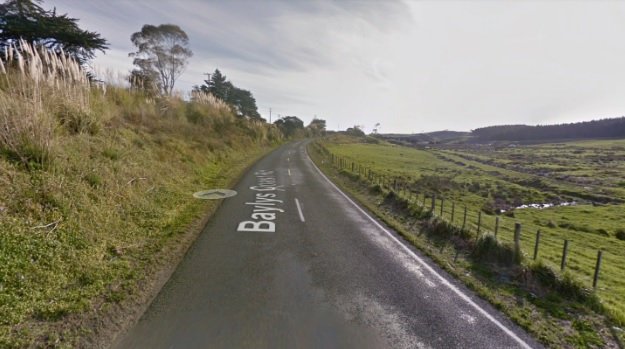 A man was hit and killed while walking down Baylys Coast Rd, Dargaville, in the dark. Photo: Google
A 21-year-old man was hit by a car and died yesterday as police were warning him of the dangers of walking on the road.

Northland police Detective Inspector Rhys Johnston said staff received a number of calls from people about a man in dark clothing walking along the centre of Bayly's Coast Rd in Dargaville about 6.10pm yesterday.

Callers told police they had nearly hit the man, who was swinging a pipe, on the unlit rural road. One person stopped and told him it was hard to see him because of his dark-coloured clothing.

Police officers went to talk to the man, who hit the patrol car with the pipe as they drove past.

The officers turned around and parked on the side of the road before talking to the man, who refused to get off the road.

The man started heading across to the other side of the road, away from the officers, and walked into the path of an oncoming car.

Next of kin are still being notified, Johnston said.

"Our thoughts are with his family at this extremely difficult time and we will be ensuring they are supported," he said.

"This was a very upsetting incident for all involved, including our officers who were attempting to try and assist this man to safety and we are ensuring they are being offered welfare."

He said it was also a traumatising incident for the driver of the vehicle and they were being supported by Police.

Police are investigating and it had been referred to the IPCA and WorkSafe.